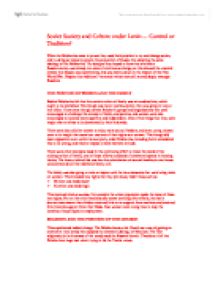 Soviet Society and Culture under Lenin&amp;#133; Control or Tradition?

Soviet Society and Culture under Lenin... Control or Tradition? When the Bolsheviks came to power they used their position to try and change society and by doing so hoped to groom the population of Russia into adopting the same ideology of the Bolsheviks. By doing so they hoped to form the revolution. Russian society was already in a state of continuous change, so this showed the unstable climate that Russia was experiencing, this was mainly down to the impact of the First World War. Despite this traditional views and values were still rooted deeply amongst Russians. THE POSITION OF WOMEN AND THE FAMILY Radical Bolsheviks felt that the current notion of family was an outdated one, which ought to be abolished. This though was never a serious policy that was going to be put into effect. ...read more.

This included new rights that they previously hadn't had, such as; * Divorce was made easier * Abortion was made legal This received relative success. For example the urban population made the most of these new rights. But on the other hand also saw some worrying after effects, the rise in divorce rates meant that children received little or no support from mothers and received little financial support from their Dads. Also women took a long time to reap the benefits of equal rights in employment. RELIGION AND THE POSITION OF THE CHURCH This experienced radical change. The Bolsheviks saw the Church as a way of getting an alternative view across that escaped the common ideology of Marxism. The Tsar religiously (in both senses of the word) used the Russian church. Therefore it left the Bolsheviks a huge task when trying to rid the Tsarist values. ...read more.

THE IMPACT OF THE BOLSHEVIK REVOLUTION ON POPULAR CULTURE AND THE ARTS In art many of the traditional views were challenged, but this was also due to the impact of the First World War. Artists now concentrated on creating visions of how they saw the future world. The Bolsheviks also called upon the services of V. Mayakovsky who worked on creating slogans and posters for the government. Even though his work was propaganda it was always innovative. Architecture made slow progress due to the economic difficulties brought upon from the First World War. Garden cities and high rise apartments were the focus again highlighting the signal of the future. The most successful literature was about society where people were only identified by numbers. This idea was written about by novelists Sholokhov and poet Anna Akhmatova The theatre was way behind though on the revolutionary aims of the Bolsheviks. But this was soon rectified, as people such as Meyerhold produced "Mystery Bouffe" which demonstrated workers defeating their exploiters. ...read more.