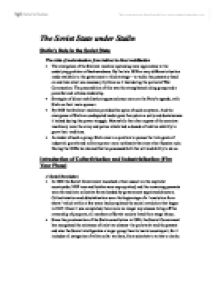 The Soviet State under Stalin Stalin's Role in the Soviet State The crisis of modernisation: from indirect to direct mobilisation * The emergence of the Stalinist machine opened up new approaches to the underlying problem of backwardness. By the late 1920s a very different situation made available to the government a third strategy - to tackle the peasantry head on and take what was necessary by force as it had during the period of War Communism. The precondition of this was the strengthened ruling group and a powerful and ruthless leadership. * Strategies of direct mobilisation appeared once more on the Party's agenda, with Stalin as their main sponsor. * By 1929 the Stalinist machine provided the spine of such as system. And the emergence of Stalin as undisputed leader gave the system a unity and decisiveness it lacked during the power struggle. Meanwhile the other organs of the coercive machinery were the army and police which had a decade of relative stability to grow their traditions. * As leader of such a group, Stalin was in a position to pursue the twin goals of industrial growth and military power more ruthlessly than any other Russian ruler. During the 1930s he showed that he possessed both the will and ability to do so. Introduction of Collectivisation and Industrialisation (Five Year Plans) A Social Revolution * In 1929 the Soviet Government launched a final assault on the capitalist countryside. NEP men and kulaks were expropriated, and the remaining peasants were formed into collective farms headed by government appointed directors. Collectivisation and dekulakisation were the beginnings of a 'revolution from above' which within a few years had completed the social revolution that begun in 1917. Once it was completed, there were no longer any classes living off the ownership of property; all members of Soviet society lived from wage labour. * Since the proclamation of the Stalin constitution in 1936, the Soviet Government has recognised the existence of only two classes- the proletariat and the ...read more.

This means that the efficiency with which capital was used actually fell in this period. This reflects the immense wastage of the early years of the industrialisation drive. Plants were built before machinery was ready to use them. Peasants wrecked machines they did not understand. * By the mid 1930s, the profit the government made on resales of grain and other produce extracted through compulsory procurement quotas accounted for one third of the budget, illustrating the importance of collectivisation to the industrialisation drive. It is now clear however, that resources did not flow from countryside to town. On the contrary, there was a vast flow of money and resources in the opposite direction. Peasants found an important source of income by selling produce they grew on their private plots, which sold at high prices in the towns. In addition, the government was forced to invest heavily in agriculture simply to replace the number of livestock killed during collectivisation. * By the late 1930s the collective farms worked extremely effectively as a way of pumping resources from the countryside to the government. * The USSR industrialised at the expense of both town and countryside, at the cost of a decline in consumption levels and living standards of both the proletariat and the peasantry. In both areas, declining consumption levels released resources for investment. The resources that fuelled industrialisation came from the consumption fund of Soviet society as a whole. * In the 1930s and 1940s the USSR invested very little in housing (as opposed to a lot in the 1920s), diverting funds into heavy industry instead. As a result, the housing conditions of Soviet citizens declined drastically. In Moscow, in 1935, 6% of renting families occupied more than one room, 40% had a single room, 24% occupied part of a room, 5% lived in kitchens and corridors, 25% lived in dormitories. Conditions in provincial towns were often far worse. ...read more.

Almost 700 000 of those died in 1937 and 1938, at the height of the purges. At present, these are the best estimates available, according to David Christian. However, we can be certain that many more died unrecorded, so these count as low estimates. According to Robert Conquest, for example, 7 to 9 million people were arrested between 1936 and 1938, and that between 1 and 2 million were shot. In addition, a million people a year died from the terrible conditions of prison camp life, out of a total 8 to 12 million people. Altogether, Conquest estimates that 12 million people may have died in the camps post purge. If the 7 million or so he estimates to have died during dekulakisation and the 1933 famine are added to these figures, the Stalinist period appears to have accounted for about 20 million casualties. * According to David Christian, based on archival evidence, he suggests that in the late 1930s and 1940s, between 2 and 4 million lived in labour camps or as exiles in labour settlements. Christian: "Death rates in the [labour] camps were high, but, except during the war, they were probably not as high as the 10% per annum that Conquest regards as the normal rate. Recent archival research suggests that death rates in the camps reached 10% per annum only in 1939, and again during WW2. At other times, they ranged from 3.5% to almost 7% per annum." * In addition, Christian contradicts Conquest, in saying that far fewer died during the purges of the late 1930s than during collectivisation and the collectivisation famine of 1933. Despite the fact that the purges were seen as the height of Stalinist repression, this was mainly due to the fact that they were a far greater shock to the Soviet elite. * Explaining the terror: BUILDING A LOYAL RULING ELITE: THE VIDVIZHENTSY - The simplest explanation of the purges sees them as a product of Stalin's determination to remove all possible rivals and opposition. ...read more.