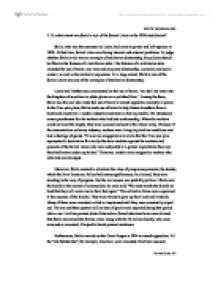 3. To what extent was Stalin’s rule of the Soviet Union in the 1930s totalitarian?

Lenin and Trotsky once commented on the use of terror, ‘we shall not enter into the kingdom of socialism in white gloves on a polished floor.’ Among the three, Stalin was the one who made full use of terror to smash opposition and stay in power. In the Five-year plans, Stalin made use of terror to help Russia transform from a backward country to a modern industrialized state as fast as possible. He introduced severe punishment for the workers who had bad workmanship. When the workers could not meet the targets, they were accused and sent to the labour camp. Because of the concentration on heavy industry, workers were living in primitive conditions and had a shortage of goods. “It is not an exaggeration to claim that the Five-year plan represented a declaration for war by the state machine against the workers and peasants of the Soviet Union who were subjected to a greater exploitation than any they had known under capitalism.” However, medals were assigned to workers who achieved record output.

Moreover, Stalin wanted to eliminate the class of prosperous peasants, the kulaks, which the New Economic Policy had encouraged because, he claimed, they were standing in the way of progress. But the real reason was probably political: Stalin saw the Kulak as the enemy of communism, he once said, “We must smash the Kulaks so hard that they will never rise to their feet again.” The collective farms were organized at the expense of the Kulaks. They were forced to give up their land and livestock. Many of them were executed, exiled or imprisoned until they were eventually wiped out. Yet one and three quarter million tons of grain were exported during that period while over 5 million peasant died of starvation. Some historians have even claimed that Stalin welcomed the famine, since along with the 10 million kulaks, who were removed or executed, it helped to break peasant resistance.

Furthermore, Stalin carried out the Great Purges in 1934 to smash opposition. All the “old Bolsheviks”, for example, Zinoviev, were executed. 8 million innocent people were sent to the labour camp by 1938. The purges were successful in eliminating possible alternative leaders and in terrorizing the masses into obedience.

Stalin also implemented one-man and one-party dictatorship. Soviet Union was ruled by the Bolsheviks since Stalin rose to power. He kept Bolshevik as the only party in the country. When Stalin had come to power in 1929, he expelled his political opponents, for example, Bukharin from the party. Stalin also wanted to get rid of the “old Bolsheviks”, he hence launched the Great Purges in 1934. Over the next 4 years, hundreds of important officials were arrested or tortured and force to appear in series of “show trials”. The “old Bolsheviks”, such as, Zinoviev, Kamenev and Radek, with 13 other generals and 8 million innocent people were all executed. The purges were successful in eliminating possible alternative leaders and in terrorizing the masses into obedience. The new constitution in 1936 gave a sense of democracy as all the citizens with age over 18 were allowed to vote for members of the Supreme Soviet. However, the democracy was an illusion, the real power in Soviet Union rested on the communist party and Stalin. As a result, one-man and one-party dictatorships were appeared in Soviet Union.

In addition, Stalin had carried out economic control over the country. He carried the Five-year plans in 1928-1937. Stalin believed that a rapid and expansion of heavy industry was essential so that Russia would survive the attack which he was convinced would come sooner and later from the Western capitalist powers who hated communism. He said, ‘we are 50 or 100 years behind the advanced countries. We must make good this distance in 10 years. Either we do it, or we shall be crushed.’ The first five-year plan concentrated on the production of heavy industries, while the second and third five-year plan not only focused on the heavy but also lighter industries and consumer goods. In spite of all sorts of mistakes the plans were a remarkable success. The production of coal, steel and iron expanded 4 times. By 1940, Soviet Union had overtaken Britain in iron and steel production. The Five-year plan transformed Russia from a backward country to a modern industrialized state. In 1939, Russia was surpassed in gross industrial output only by the US and Germany. However, quantitatively and qualitatively, by Western criteria, standards of production were still low.

Stalin also carried out agricultural collectivization in 1929, as the existing system of small farms was inefficient. Large farms which were under state direction and using tracters combine harvesters, would vastly increased grain production. Yet one and three quarter million tons of grain were exported during that period while over 5 million peasant died of starvation. Some historians have even claimed that Stalin welcomed the famine, since along with the 10 million kulaks, who were removed or executed, it helped to break peasant resistance. In this way, over 90% of all farmland had been collectivized by 1937. Besides, Stalin did make some concessions in response to peasant resistance. Each family was allowed to keep a small piece of land within the collective farm, on which the family members could grow their own crops. Members of the collective farms could sell in free markets any products they raised beyond the assigned targets. In one sense, Stalin could claim that collectivization was a success, it allowed greater mechanization, which gradually increased grain output until 1940 it was over 80% higher than 25% since 1913.

Furthermore, Stalin had carried out social controls. Writers and artist were expected to produce works of realism glorifying soviet achievements. Anybody who did not conform was persecuted. According to the ambassador, “half the artists and musicians in Moscow are having nervous prostration and the others are trying to imagine how to write and compose in a manner to please Stalin”. Education like everything else was closely watched by the secret police, and it tended to deteriorate to indoctrination. Besides, an attempt was made to clamp down Orthodox Church. The churches were closed and clergy were persecuted.

For the expansionist foreign policy, Soviet Union propagated “world revolution” throughout the world. The Comintern was founded in 1919 which included the aim to overthrow all non-communist government. The Stalin also signed the Nazi-Soviet Non-aggression Pact with Germany in 1939 and divided Poland among them.