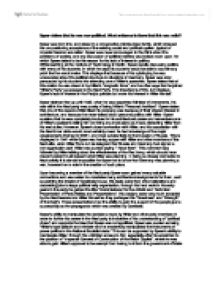 Speer claims that he was non-political - What evidence isthere that this was valid?

Speer claims that he was non-political. What evidence is there that this was valid? Speer was born into, and raised in a conservative middle-class family, which stressed the unquestioning acceptance of the existing social and political system, typical of Imperial German education. Speer was never encouraged to the think about the problems of society, and any discussion of political matters was looked down upon, for which Speer claims to be the reason for his lack of interest in politics. While teaching at the Institute of Technology in Berlin, Speer recalls discussing politics with many of his students, in which he says his students would be able to counter any point that he would make. This displays that because of his upbringing he was uneducated about the political structure or situations in Germany. Speer was soon persuaded by his students into attending one of Hitler's speeches. Speer states that at this oration he was drawn in by Hitler's "magnetic force", and he often says that he joined "Hitler's Party" as opposed to the Nazi Party. The importance of this, is it displays Speer's lack of interest in the Party's policies but more his interest in Hitler himself. ...read more.

These presentations had the ability to gain the support of the people just a successfully as the propaganda which was created by Goebbels. Speer's ability to manipulate the decisions made by Hitler and other party members in order to further his career in the Nazi party is indicative of his understanding of "political chess" and supports the idea that Speer was not apolitical. Speer was quoted as being "Hitler's loyal paladin and minister and he masterfully manipulated the instruments of power politics in the National Socialist state." This can be supported by Speer's ability to manipulate Hitler, through his unlimited access to him, especially after his appointed to the position of "Inspector General of Construction of the Reich Capital", where he was able to gain Hitler's approval to be exempt from having to inform the government officials about plans, including the destruction of central parts of the city and the movement of the railways. This shows that Speer was actively involved in political manoeuvres to consolidate power "within" his jurisdiction. Speer also used political decrees and documents that were vaguely worded and easily manipulated to fulfill his objectives at certain periods in his career. ...read more.

Speer claims that he was apolitical for his time in the Nazi party, and says that he had no interest in politics at all. In 1944 Speer wrote a letter to Hitler in which he said "The task i have to fulfill in an unpolitical one". This was to be the foundation of his defence at Nuremberg in 1946. However, Speer's ability to rise to the highest position in the Nazi party, through exploiting and manipulating party members, and documents displays high degree of political intelligence which opposes his claims that his intentions were purely career based. Speer claims that he had no knowledge of the activities of the Nazi party, such as the "Final Solution" may also be questioned, as he was one of the highest ranked Nazi officials, and so would have been present at meetings in which party politics were discussed. Speer's claims that he was "non-political" is unlikely to be true, as it is evident that a high level of political manipulation was needed in order to consolidate power within the Nazi Party, therefore on the premise that Nazi leaders had to "political players", Albert Speer's career was not apolitical. ...read more.