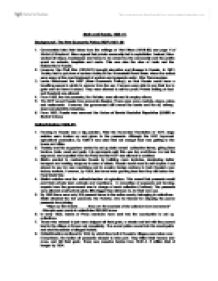 Stalin and Russia, 1929-41. Background - The New Economic Policy (NEP) 1921-28. 1. Communists take their ideas from the writings of Karl Marx (1818-83) see page 4 of Nichol & Shephard. Marx argued that private ownership led to exploitation. Instead, Marx wanted all shops, businesses and farms to be owned by the community and the profits spent on schools, hospitals and roads. This was also the view of Lenin and the Bolsheviks in Russia. 2. However, the Civil War (1918-21) brought starvation and disease in Russia. In 1921, Trotsky had to put down a serious mutiny at the Kronstadt Naval Base where the sailors were angry at the cruel treatment of workers and peasants under War Communism. 3. Lenin introduced the NEP (New Economic Policy) so that Russia could have a breathing space in which to recover from the war. Farmers were able to pay their tax in grain and not have it seized. They were allowed to sell for profit. Private trading of food and livestock was allowed. 4. From 1925, the rich peasants, the Kulaks, were allowed to employ others. 5. The NEP saved Russia from economic disaster. There were more markets, shops, cafes and restaurants. However, the government still owned the banks and the oil, railway, steel and electricity industries. 6. From 1923, Russia was renamed the Union of Soviet Socialist Republics (USSR or Soviet Union). ...read more.

More tractors were gradually provided in the late 30s. By 1937, most farms were collectives. Peasants produced milk, meat, vegetables and fruit on their private plots for their own use. Industrialisation & The Five Year Plans. 1. "...those who lag behind are beaten........We are behind the leading countries by 150 years........We must make up this distance in ten years. Either we do it or we go under" Stalin, 1928. 2. Stalin wanted to drag the Soviet Union into the C20th. His policy involved devising a series of Five Year Plans to set government targets for industrial production. The government's economic planning department in Moscow was called Gosplan. It decided every detail of what should be made and what would happen to the products. It planned new cities and new factories in old industrial centres. 3. The First Five Year Plan (1928-32) set out to develop heavy industry and so double the production of iron, steel, heavy machinery and chemicals. Huge new dams like the Dnieper Dam were constructed to make hydro-electric power for the new factories. 4. The Second Five Year Plan (1933-37) was intended to run the new factories more efficiently, provide better living conditions for the new factory workers and improve transport. Vast areas of blocks of flats began to surround the cities, each with running water and electricity. Schools and hospitals were provided. New railways, airports and roads were constructed. ...read more.

6. Hundreds of towns and villages renamed in Stalin's honour, e.g. Stalingrad. Russian Foreign Policy, 1918-41 1. Russia left the First World War in March 1918 and signed The Treaty of Brest-Litovsk with Germany. The Russians were not invited to Versailles. 2. Lenin and Trotsky set up the Comintern (The Communist International) to spread revolution to other countries. They knew that Russia was surrounded by Capitalist countries and would have to fight to survive. Britain, France and the USA had sent troops to fight the Reds in the Russian Civil War. "We must strangle Communism, like a baby at birth" - Churchill, 1918. 3. Stalin believed that Russia must first become strong through the FiveYear Plans. He knew from Mein Kampf that Hitler's plans for lebensraum would eventually mean war. However, the third Five Year Plan that intended to rearm the Soviet Union was unfinished when Germany took over first Austria 1938 and Czechoslovakia in 1939. Also, Russia lacked military leadership as so many of her officers had been shot in the Purges. 4. Alliance talks between Russia and Britain broke down in 1939. So, on 23 August 1939, Molotov, the Russian Foreign Minister, signed a Non-Aggression Pact with Ribbentrop, Germany's Foreign Minister to buy time. They agreed not to attack each other but to share Poland between them. 5. Germany's attack on the Soviet Union in June 1941, Operation Barbarossa, was a complete surprise to Stalin. However, for Hitler it was an error that eventually cost him everything for the invasion meant war on two fronts for Germany. ...read more.