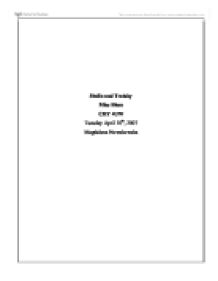 This can also be associated with inexperience, innocence and a lack of understanding. 2. Compare and contrast the public reactions of Joseph Stalin and Leon Trotsky to the death of Lenin as seen in Source C and Source D. (6) The context of both Source C and D is that they are public reactions of Stalin and Trotsky to the death of Lenin. They are similar and can be compared because they are speaking of the same event. The nature of the two documents is also alike because they are speeches made to the general public of the Tiflis Station (Source D) and the Second All-union Congress of Soviets (Source C). There are several noticeable differences between Source C and D. Leon Trotsky, in Source D, is showing sympathy to Lenin; he is sorry and expressing his condolences to his death. Nevertheless, the tone of Source C is contrasting to Source D. Joseph Stalin, in Source C, is constantly referring to the Party of the Communists, also called the Party of the working class. The purpose of the two speeches was to address the death of Lenin. ...read more.

Stalin wanted to achieve 'socialism in one country', while Trotsky, along with Lenin, wanted 'Worldwide Socialism". Stalin knew that his idea would fail if it was not brought out at exactly the right time, proving that he was a strong opponent, willing to do anything to achieve his goals. Stalin did not make his views public until Trotsky's campaign became less popular. He proposed his theory in 1925, and his own original supporters were opposed of this plan. It was too late because Stalin had become too powerful. I speculate that Stalin only proposed his theory so late because it was in direct conflict with Trotsky's theory of a worldwide revolution. For Stalin to achieve his philosophy of 'socialism in one country', he needed to make the ideal and perfect socialistic/communist state. Stalin would only be able to accomplish this by making the Soviet Union a dictatorship, with him making all of its important decisions and thereby making Russia a totalitarian state. After long battles, Stalin finally beat Trotsky over this issue because he had the support of other members of the government who feared Trotsky. Therefore, that is why Joseph Stalin and Leon Trotsky are such tremendous adversaries. ...read more.