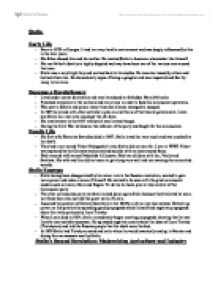 Stalin Early Life * Born in 1879 in Georgia. Lived in a very hostile environment and was deeply influenced by this in his later years. * His father abused him and his mother. He wanted Stalin to become a shoemaker like himself. * His real father's identity is highly disputed and may have been one of the various men around the town. * Stalin was a very bright boy and worked hard in his studies. He was also teased by others and bullied others too. He showed early signs of being a gangster and was respected and fear by many in his town. Becomes a Revolutionary * Lived under czarist domination and was introduced to forbidden Marxist's books * Preached revolution to the workers and ran crimes in order to fund his communist operations. * Was sent to Siberia and prison many times but always managed to escaped. ...read more.

Stalin Emerges * Stalin having been disappointed by his minor role in the Russian revolution, wanted to gain more power and make a name of himself. He wanted to be seen with the great communist leaders such as Lenin, Marx and Engels. To do his he had a plan to take control of the Communist party. * The other communists party members looked down upon Stalin because they believed he was a worthless bum who just did the grunt work of Lenin. * Assumed the position of General Secretary in the 1920's a job no one else wanted. He built up power on this position by spreading good propaganda about himself and negative propaganda about his rivals particularly Leon Trotsky. * When Lenin died in 1924, Stalin immediately began creating propaganda showing that he was Lenin's most suitable successor. ...read more.

Stalin and Providence * Believed he had an important role in saving Russia from Czar domination and hostile nations. * Saw himself as a victim of persecution and conspiracy and would attack others before they could attack him. He was very suspicious, paranoid and resentful. * Avoided contact with "ordinary people" and praised himself with endless propaganda showing him as their great leader. Terror and Purges * By the mid 1930's Stalin would make sure he would have had absolute power in the party. The first step to this would be dealing with the surviving party members in the revolutionary days. * He held trials and made sure that the suspect confessed to his crime through torture and threat of death. He made many party members admit that they were traitors to Russia and had them shot. * Even his secret police the NKVD weren't safe from him and many were killed in order to cover up any traces towards him. ...read more.