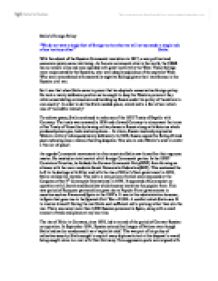 Stalin's Foreign Policy "We do not want a single foot of foreign territory but we will not surrender a single inch of our territory either" Stalin. With the advent of the Russian Communist revolution in 1917, a new political and economic system came into being. As the sole communist state in the world, the USSR has no natural allies and was regarded with great hostility by the West. These feelings were reciprocated by the Russians, who were deeply suspicious of the capitalist West. Who were remembered with essentially negative feelings given their interference in the Russian civil war. So it was that when Stalin came to power that he adopted a conservative foreign policy. He took a mainly defensive position as he sought to deep the Western powers at bay while consolidating communism and building up Russia under his policy of 'socialism in one country'. In order to do this Stalin needed peace, which led to a fear of war which was of 'incredible intensity' To achieve peace, Stalin continued to make use of the 1922 Treaty of Rapallo with Germany. ...read more.

It approved of Communist co-operation with Liberals and Socialists which became known as the popular front. This new period of European pan-socialism gave rise to Popular Front governments in countries such as France and Spain in the 1930's. It was in this administration however, in Spain that gave rise to the Spanish Civil War of 1936. A conflict which Stalin saw fit to involve himself. During the war Stalin sent sufficient aid to prolong rather than win the war. There was never more than 2,000 Russian personnel in Spain, along with a small amount of tanks and planes at any one time. The rise of Hitler in Germany, circa 1933, led to an end of the period of German-Russian co-operation. In September 1934, Russian entered the League of Nations even though Stalin had earlier condemned it as a 'capitalist club'. This was part of his policy of collective security. Stalin sought to exploit every diplomatic tool at his disposal to avoid being caught alone in a war with Nazi Germany. ...read more.

In an effort to gain valuable preparation for a was he now saw as inevitable he signed the Nazi-Soviet non-aggression pact in August 1939. This allowed for 10 years when neither would attack the other and a secret clause allowed for the partition of Poland if either power invaded. In September 1939 WWII broke out with the German invasion of Poland. Stalin moved quickly to secure the lands promised to him by the Nazi-Soviet Pact. An atmosphere of co-operation continued between Germany and Russia with Russia providing Germany with oil, grain and war materials and allowing German ships use of Russian naval bases. Disagreements arose over proposed areas of German occupation in the Baltic states which saw a dip in Nazi-Soviet relations. This led to Hitler giving the order for Operation Barbarossa in June 1941. This took Stalin by surprise as he had not expected the attack while Germany was still engaged in the Battle of Britain. The Russian army was not ready which allowed for the speed and success of Hitler's first moves. Yet eventually Stalin and the whole of Russia fought back against the invaders and 'tore the guts out of the German army'. ...read more.