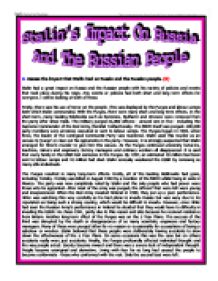 Stalin's Impact On Russia And The Russian People.

3. Assess the impact that Stalin had on Russia and the Russian people. (8) Stalin had a great impact on Russia and the Russian people with his variety of policies and events that took place during his reign. Any events or policies had both short and long term effects for everyone. I will be looking at both of these. Firstly, there was his use of terror on the people. This was displayed by the Purges and labour camps both which Stalin commanded. With the Purges, there were many short and long-term effects. In the short-term, many leading Bolsheviks such as Kamenev, Bukharin and Zinoviev were removed from the party after show trials. The military purged 25,000 officers - around one in five - including the Supreme Commander of the Red Army, Marshal Tukhachevsky. The NKVD itself was purged. 500,000 party members were arrested, executed or sent to labour camps. The Purges began in 1934, when Kirov, the leader of the Leningrad Communist Party was murdered. Stalin used this murder as an excuse to 'purge' or clear out his opponents in the party. However, it is strongly suspected that Stalin arranged for Kirov's murder to give him this excuse. As the Purges continued university lecturers, teachers, miners and engineers, factory managers and ordinary workers all disappeared. It is said that every family in the USSR lost someone in the Purges. By 1937, an estimated 18 million had been sent to labour camps and 10 million had died. Stalin seriously weakened the USSR by removing so many able individuals. The Purges resulted in many long-term effects. Firstly, all of the leading Bolsheviks had gone, including Trotsky. Trotsky was killed in August 1940 by a member of the NKVD whilst living in exile in Mexico. The party was now completely ruled by Stalin and the only people who had power were those who he appointed. After most of the army was purged, the officers' that were left were young and inexperienced. ...read more.

During 1933, the million head of cows and pigs was at its lowest between 1913-1940 but then at its highest in 1940. Due to the disruption cause to agriculture, there were severe food shortages. When added to the disastrous harvest in 1932, the result was an unimaginable severity of famine from 1932-1933. The state never admitted that a famine was taking place so no international aid was received. Indeed, food was still being exported from the USSR to other countries. Stalin even sent out requisitioning hangs to seize what little grain there was. Grain was held in stores that were 'almost bursting', and even left to rot in the open while people nearby starved to death. Another short-term result was that by 1933 there were 200,000 tractors in the machine-tractor station and over 25,000 combine harvesters. Also, Stalin's wife even committed suicide. Nadia Alliluyeva saw the hardship that the peasants were made to endure and could no longer deal with it so took her own life. The main long-term result of collectivisation was that an estimated 13 million peasants, and possibly more, died. This was mainly due to the dreadful famine that there was during those years. Also, the figures show that the harvest did improve gradually after the famine. By 1940, the production was back to how it was. The lives of many peasants had been improved. They were given access to schooling, theatres, concerts and many other luxuries. There was increased literacy and even electricity. The kulaks were wiped out entirely as a class and by the end of the 1930's there were none of them left. They had either been killed or sent to labour camps. Before collectivisation, Russia was an agricultural society. Now it had been turned into a major industrial power. Mechanisation on the farms enabled many peasants to be drawn into the cities. The policy that went hand-in-hand with collectivisation was industrialisation - mainly the Five-Year Plans. ...read more.

Every worker was entitled to take a holiday each year - this was completely unknown before the Revolution. Trade unions and collective farms played a big part in providing sports facilities, clubs, film shows, festivals and general entertainment. However, for some people in collectives - the peasant - life was not that much better. There were few consumer goods and people were living in fear. For those in the labour camps, life was no better. In particular, there was a changing role of women in the mid 1930s. The State encouraged families to stay together through propaganda and divorces and abortion was made harder. There was child allowance for married couples and new cr�ches and day-care centres so women were able to work. By 1937, women were 40% of industrial workers (compared to 28% in 1927), 21% of building workers and 72% of health workers. Four out of five workers new workers recruited between 1932 and 1937 were women. The longer-term impacts of this were that generally living conditions improved for most Russians, although not all. Life was getting better until the German invasion when things were put on hold, as factories' priorities were making machinery etc to use in the war. The magnificent town built that was Magnitogorsk became renown for being a symbol of Russia's modernisation. Here, once everything was finished, there were a large number of theatres, schools and hospitals. There were all things that contributed to improving the general living conditions of Russians. Even the peasants were given access to education. In conclusion, Stalin played a very big part on the impact on Russia and the Russian people. This was through his variety of different policies and events. His main impact was saving Russia from invasion by Hitler amongst other important factors. After industrialisation and the Five-Year Plans, he managed to improve the lives of the people and the conditions they lived in and worked in. He not only managed to improve the peoples lives but the status Russia had as a country - it had now become a industrialised, modernised country. ...read more.