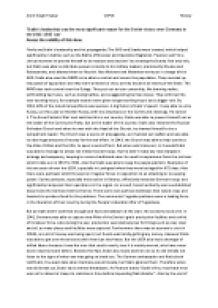 'Stalin's leadership was the most significant reason for Soviet victory over Germany in the 1941-1945 war.' Assess the validity of this view.

﻿Amrit Singh Thabal 13PCK History ?Stalin?s leadership was the most significant reason for the Soviet victory over Germany in the 1941-1945 war? Assess the validity of this view. Firstly are Stalin?s leadership and his propaganda. The GKO and Stavka were created, which helped significantly in battles such as the Battle of Moscow and Operation Bagration. Pearson said ?At a critical moment he proved himself to be resolute and decisive" by creating the Stavka. Not only this, but Stalin was able to distribute power correctly to his military leaders; prominently Zhukov and Rokossovsky, and allowed them to flourish. Also Molotov and Malenkov were put in charge of the GKO. Stalin also used the NKVD to be able to control and censor the population. They rounded up thousands of opposition and they were arrested or shot, as they became an enemy of the State. The NKVD also took control over the Gulags. They put out stricter censorship, like banning radios, withholding bad news, such as losing battles, and exaggerating German losses. They enforced the new working hours; for example women were given longer working hours and a bigger role. By 1943, 60% of the industrial workforce was women. A big factor is Stalin?s Speech. It was able to unite Russia, as it focused on Mother Russia, with less emphasis on the Communist ideology. He named it ?The Great Patriotic War? and said that this is our country. Stalin was able to present himself not as the leader of the Communist Party, but as the leader of the country. Stalin also restored the Russian Orthodox Church and when he met with the Head of the Church, he showed himself to be a sympathetic leader. ...read more.

The relationship between leaders and there generals was also key, as their strategies could work. Stalin has a good relationship as he allows Zhukov full control, firstly over Moscow and then his future battles. Also with Rokossovsky, Stalin made him present his offensive for Operation Bagration three times before it was accepted. Even though it looked like a waste of time, Stalin said that if he came back this many times and thinks it will work, it must do, as he put a lot of thought into it. On the other hand, Hitler gave no consideration to his generals. For example he dismissed Guderian and his opinion into not doing Operation Citadel. His opinion was ignored and the Operation had disastrous results. Also Guderian was under too much pressure from Hitler, as Hitler wanted him to do everything; even to assist Army Group South, even though they were in clear shot of Moscow. However, Hitler was too stubborn to listen to his generals, but on the other hand, would it have made a difference as many of the people and generals around Hitler were ?yes men?. Another element of Soviet victory was the Soviet army. They had lend-lease, in which the USA gave $11.3 billion worth of supplies and Canada also funded $4.7 billion between the UK and USSR. Unfortunately by 1945, 6 million Soviet soldiers were captured by the Nazis; 75% of which were either murdered, worked to death, starved or froze to death. Unlike the Germans, the USSR used German POW?s effectively by using them in industry. The mass of the army was unbelievable. The USSR initially had 5 million men and 5 million in reserve. ...read more.

At the start of the war the USSR had 5 million troops; the Axis powers only had 3.9 million troops. So Germany was clearly not ready to take on the USSR. The German ethnic cleansing policies did not utilise the POWs or the unloyal people. These inhabitants of the Soviet occupied territories saw the Germans as liberators. These people, as well as the POW?s could have been used to bolster up numbers in the army or been used to produce equipment. Instead, the Einsatzgruppen killed them all. Finally, the German army were clearly unprepared. They were unaccustomed to the Soviet climate and conditions; mainly of the harsh winter. Also they didn?t have enough weapons because of the overstretched supply lines, as they had to travel hundreds of miles to get to the troops; an example of this is at Kursk (July 1943), where some of the troops had to wait for weapons to attack or even defend themselves. Overy agrees ?German troops were unprepared...Hitler mad errors that led to his loss.? In conclusion, Pearson states that "as a highly centralised dictatorship, Joseph Stalin almost certainly played a pivotal part in every aspect of the Soviet war effort", suggesting that Stalin's leadership was crucial to the war effort, and that the USSR would not have been as strong were it not for him. Although this is certainly true, many other factors did contribute to the war victory, including the merits of the Soviet economy under Gosplan, and the GKO (general defence council) which was established in Stalin's absence early in the war, as well as the infamous Soviet winter of 1941. Despite this, however, many historians agree that the USSR would not have been so likely to win the Great Patriotic War were it not for Stalin's efforts. ...read more.