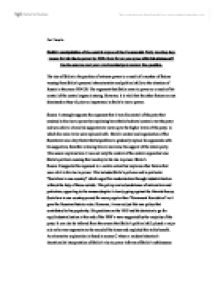 Stalin's manipulation of the central organs of the Communist Party was they key reason for his rise to power by 1929. How far do you agree with this statement? Use the sources and your own knowledge to answer the question.

Paul Tamplin Stalin's manipulation of the central organs of the Communist Party was they key reason for his rise to power by 1929. How far do you agree with this statement? Use the sources and your own knowledge to answer the question. The rise of Stalin to his position of extreme power is a result of a number of factors varying from Stalin's personal characteristics and political skills to the situation of Russia in the years 1924.29. The argument that Stalin came to power as a result of his control of the central organs is strong. However, it is vital that the other factors are not dismissed as they all play an importance in Stalin's rise to power. Source A strongly supports the argument that it was his control of the party that resulted in his rise to power by explaining how Stalin had total control over the party and was able to allows his supporters to move up to the higher levels of the party, in which his main rivals were replaced with. ...read more.

Furthermore, during the 1920s Stalin would often speak last at Politburo (The key decision making body) and would float in and out of alliances. His lack of loyalty to any of his colleagues was extremely beneficial to him, as he would cunningly float in and out of alliances as a way of gaining popularity. This was the case with Stalin's change of policy on the NEP when he turned and attacked the right wing of the party and adopted the very policies of which he had smashed with the left of the party. Stalin's cunning and intelligent political attributes are key in his rise to power. Furthermore, the source offers the idea that his own personal characteristics, being a disloyal and ruthless, played a dominant part in his climb to supreme power. However, there are a number of arguments that have not been presented in the sources. Stalin's political skills, personal characteristics, policies and his control of the party organs have all been contested in the sources but there are many other factors that must be considered. ...read more.

This was not a good idea as Lenin was a cult figure in Russia and a much respected past leader by the party members. He also came under particular pressure when faced against the Triumvirate (Stalin, Zinoviev and Kamenev). By this time Trotsky's support was absolutely minimal and he made little effort to gain support or even organise the support he had. By 1926 Trotsky's weakness was finally exploited as Stalin was in the position to expel him. By 1929 Trotsky was neither in the party or the country as Stalin had expelled him from the party and country. Finally, there is an element of luck that contributed to Stalin's rise. For example, Lenin's testament was not read out which was lucky for Stalin as he said that Stalin was "too rude" and even went as far as to say that he should be removed from his current post of General Secretary. Moreover, for most of the struggle for power, Trotsky, whom was possibly his closest challenge, was ill. Trotsky's illness was the reason he was not in Russia for Lenin's funeral and relied purely on Stalin for the date of the funeral. ...read more.