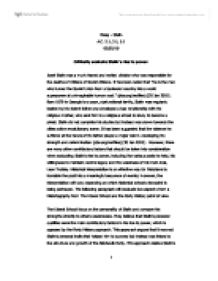 Essay - Stalin A.C. 2.1, 3.1, 5.1 02/03/10 Critically evaluate Stalin's rise to power. Josef Stalin was a much feared and reviled dictator who was responsible for the deaths of millions of Soviet citizens. It has been noted that "he is the man who turned the Soviet Union from a backward country into a world superpower at unimaginable human cost." (pbs.org/redfiles) [30 Jan 2010]. Born 1879 in Georgia to a poor, dysfunctional family, Stalin was regularly beaten by his violent father and developed a bad relationship with his religious mother, who sent him to a religious school to study to become a priest. Stalin did not complete his studies but instead was drawn towards the cities active revolutionary scene. It has been suggested that the violence he suffered at the hands of his father played a major role in developing his strength and determination (pbs.org/redfiles) [30 Jan 2010]. However, there are many other contributory factors that should be taken into consideration when evaluating Stalin's rise to power, including the various posts he held, his willingness to maintain Lenin's legacy and the weakness of his main rival, Leon Trotsky. Historical interpretation is an effective way for historians to translate the past into a meaningful sequence of events; however, the interpretation will vary depending on which historical schools viewpoint is being portrayed. ...read more.

Leading communists decided not to publish Lenin's testament as it contained criticisms of them as well as Stalin and Lenin died before any action could be taken. Even before Lenin's death, Stalin and Trotsky, along with Zinoviev, Kamenev and Bukharin were emerging as contenders to take his place, which meant Trotsky's brilliance was about to go head to head with Stalin's cunning. Trotsky seemed unprepared to fight for leadership and was easily out manoeuvred by Stalin, in fact his reason for not attending Lenin's funeral was that he had been given the wrong date by Stalin. Trotsky was originally thought of as the most obvious choice with his great mind and intelligent speeches. Trotsky had played a lead role in the October Revolution (Phillips 2000) and he had gained a lot of support during the Civil War. Stalin, on the other hand was seen as an insignificant administrator at that time; however, he had made many wise moves in his various roles and many underestimated him. When the Social Democrats split in 1903, Trotsky became a member of the Menshevik faction and developed his 'Permanent Revolution' theory, a belief that communism should spread beyond Russia. This theory had less support than Stalin's belief of 'Socialism in one Country.' Trotsky had spent many years away from Russia after escaping from exile in Siberia but returned after the 1917 February Revolution. ...read more.

Lenin memorabilia was produced from posters to matchboxes, statues were erected and Petrograd was renamed Leningrad. It has been said that Stalin constructed the 'Cult of Lenin' (Davis 2008) as a means to assist him in the leadership struggle. It cannot be said for sure whether Stalin had his sights on the leadership role in the early 1920's but his ruthless, calculating personality enabled him to manipulate situations and used every opportunity to his advantage (Davis 2008). The poor judgements and weaknesses of his opponents such as Trotsky helped Stalin to gain the support of the Communist Party. Having the power within his various job roles to find out information and ensure he had people in place who would support him was another important factor in his success. Stalin took every opportunity to take advantage of his opponents, their faults being that they trusted him too much or were not managing their own campaigns efficiently (Davis 2008). Despite not being the strongest contender as leader after Lenin's death, his actions at this time gained him popularity. Stalin's speech at Lenin's funeral portraying himself as Lenin's disciple and his vow to continue with Lenin's legacy gained him further popularity. It would be fair to say that a mixture of clever political moves, opportunity and luck assisted Stalin's rise to power, along with a wiliness to carry out the smallest of tasks to give himself more control, taking every chance possible to become more powerful. ...read more.