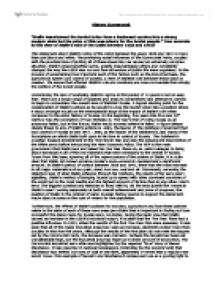 &quot;Stalin transformed the Soviet Union from a backward country into a strong modern state but the price of this was misery for the Soviet people.&quot; How accurate is this view of Stalin's rule of the USSR between 1928 and 1941?

History Coursework "Stalin transformed the Soviet Union from a backward country into a strong modern state but the price of this was misery for the Soviet people." How accurate is this view of Stalin's rule of the USSR between 1928 and 1941? This statement about Stalin's ruling of the USSR between the years 1928 and 1941 is more than just black and white. The preceding social influences of the Communist Party, coupled with the practical side of putting all of these ideas into use caused an extremely complex situation. Stalin's ideas benefited some, greatly disadvantaged others and completely changed the way the USSR was run and how all sectors of public life were organised. In the process of ascertaining how important each of the factors such as the industrial base, the agricultural system and control of society, a view of Stalinist rule between these years is created. The issues that affected Stalin's rule and decisions are more numerable than simply the welfare of the Soviet people. Undertaking the task of analysing Stalin's regime in this period of 13 years is not an easy feat. There are a broad range of subjects and ideas to comprehend and attempt to convey to begin to understand the overall view of Stalinist Russia. A logical starting point for the consideration of Stalin's actions as he sought to drag the Soviet Union into a position where it stood amongst equals on the international stage is the impact of Stalin's rule when compared to the wider history of Russia. In the beginning, five years into the new 20th Century was the coronation of Tsar Nicholas II. The Tsar's trial of ruling Russia as an autocracy failed, but in the future, Stalin would succeed where he failed. A figure always closely linked to any of Stalin's actions is Lenin, the leader of the Bolshevik movement that took control of Russia in late 1917. ...read more.

People were denouncing fellow villagers as kulaks all over Russia, with children being encouraged to inform on their own parents in order to liquidate the kulaks as a class. The reason for all of these methods of enforcing collectivisation was that Stalin simply could not afford to keep agriculture as it was. Collectivisation was so urgent to him because of the food crisis of the 1920's and because he was tired of the yearly struggle to collect grain that was desperately needed to feed the workers and to pay for the programme of industrialisation. Stalin needed the grain to feed the workers and he needed the workers to keep the industrial side of the USSR expanding. Because of this, collectivisation was the most important part of Stalin's drastic remodelling of Russia, which was why he sanctioned so much brutality to and killings of the kulaks as a class. A contra-argument to all of these negative points about Stalin's plans and collectivisation would be showing who stood to gain from his overhaul of the industrial and agricultural system. Even though there were many who suffered terribly as a result of Stalin's plans, there were some people who benefited. Firstly, the role of women in Russia was markedly raised during all of this as a result of Stalin and his ideas. Women were employed in construction and in factories, and were overall on a much more even-footing with their male counterparts as a direct result of Stalin's policies. Also, contrasting the punishments that were handed out to those who were absent or did not meet their target, workers or managers who excelled were richly rewarded. The Stakhanovite Movement was a system where great individual feats in factories were widely reported in the press and Stakhanovites were rewarded well. The Stakhanovite Movement, named after the original extreme worker Alexei Stakhanov, caused deep unrest amongst other workers though, as these 'heroic' workers could push up individual targets and increase the amount of work each person was supposed to do each day. ...read more.

In the purges he not only wiped out Russia's literary and academic population, but also most of those who were capable of taking command. As a result, this led to great difficulties in the war when there were severe problems as a direct result of not having enough officers that could take control who had previous battle experience. To complete his stranglehold on society, Stalin introduced censorship that ensured that only pro-Communist views would be published. Newspapers, books, music, drama, art all had to be in favour of Stalin and of Communism, and many an author was arrested for attempting to publish something that spoke out against Communism. After analysing carefully all the different sides of the story, the argument and the debate about Stalinist Russia between the years 1928 and 1941 I have reached a definite conclusion. It is true to say that as a direct result of Stalin's Five Year Plans and collectivisation, coupled with extremely effective propaganda that Russia was advanced considerably in all sectors under Stalin's rule. However, the cost of this advancement was phenomenal. Basic errors were made and could not be admitted and were blamed on mystery 'saboteurs' that were adamant on halting the progress of the Communist party. This disorganisation of both industry and agriculture led to devastating famine and horrific death tolls. Also, Stalin's method of ensuring his dictatorship, removing all of his opposition, was both brutal and damaging to his own country. His actions in the purges not only weakened his country's defence, but deprived Russia of over a decade of artistic advancement. Yes, Stalin was responsible for incredible developments in the USSR, and yes he did transform it from a backward country into a strong modern state. But the price for this was the misery of the Soviet people, and the eventual crippling of Russia's socio-economic growth through bad decisions and brutality. Therefore I believe that the statement about Stalin is highly accurate, but that it was not just the people, but the country also that paid the price. ...read more.