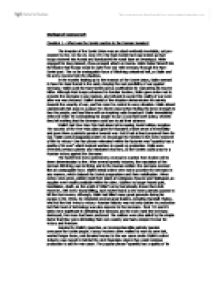 Stalingrad Coursework Question 1 - What was the Soviet reaction to the German invasion?

Stalingrad Coursework Question 1 - What was the Soviet reaction to the German invasion? The invasion of the Soviet Union was an attack evidently inevitable, yet pre-empted by few. On the 22, June 1941 the Nazi-Soviet Pact was broken as Nazi troops stormed into Russia and bombarded the naval base at Sevastopol. Hitler engaged his long planned, three-pronged attack on Russia. Stalin fooled himself into the illusion that Russia would be safe from war with Germany through the Nazi-Soviet pact. The so far unstoppable force of Blitzkrieg unleashed hell, as Stalin and his army cowered into the shadows. In the months leading up to the invasion of the Soviet Union, Stalin seemed to have his head buried in the sand, denying the real possibility of war against Germany. Stalin used the Nazi-Soviet pact as justification for warranting his trust in Hitler. ...read more.

Stalin used propaganda posters to encourage the Soviets to live every moment of life for victory! One key phrase reiterated within the factories was "quantity has a quality of its own" which inspired workers to speed up production. Stalin even reversed previous policies and reinstated churches, so the Soviets could pray for a Russian victory against the Germans. The Soviet Red Army underwent a reversal in reaction from broken will to sheer determination to live. After several speedy victories, the reputation of the German Blitzkrieg was terrifying and to the Russian soldiers the Germans seemed like an unstoppable force. Stalin's initial orders were not to provoke the Germans in any manner, which delayed the Soviet preparations and their mobilisation. When orders were given, soldiers took their stand at Leningrad, Moscow and Stalingrad, as supplies were readily available within the cities. ...read more.

Industry was moved to behind the Ural Mountains where they could continue production to aid the war cause. The popular phrase "quantity has a quality of its own" inspired workers to work up to sixteen- hour days. People were even found digging trenches in the streets to aid the defence of Russia in the war. The Soviet Unions overall reaction resulted in victory in Russia and marked a turning point in the Second World War! Three main factors aided the Russians to victory alongside their determination. Firstly, the Germans were not prepared for the severity of Russian winter and much of their equipment couldn't operate in the freezing conditions. Secondly, Hitler's single-minded approach to defeating Stalin blinded him to the reality of defeat. Thirdly, the ruthless Nazi tactics spurred the Soviets with patriotic zeal and a passion for vengeance. Consumed with the impressive reaction of Stalin, the Russian army and the Soviet people, these factors resulted in a crucial victory for Russia. Emma Mooney ...read more.