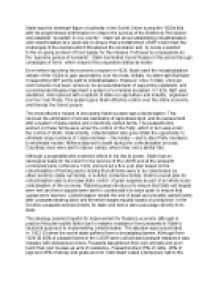 Stalinism and the transformation of Russia.

﻿Stalin was the dominant figure of authority in the Soviet Union during the 1920s-40s with his singleminded detrmination to ensure the survival of the Bolshevik Revoilution and establish ?socialism in one country?. Stalin set about establishing industrialisation and collectivisation at a rapid rate to ensure that a transformed USSR could meet the challenges of its enemies which threatened the revolution and to rovide a solution to the on-going problem of food supply for the masses. Portrayed by propaganda as the "supreme genius of humanity", Stalin dominated Soviet Russia in this period through campaigns of terror which ensured his unquestion status as leader. Even before launching his economic program in 1929, Stalin used the industrialisation debate of the 1920s to gain ascendancy over his rivals. Initially, he sided with Bukharin in supporting NEP as the path to industrialisation. However, once Trotsky, Zinoviev and Kamenev had been removed, he accused Bukharin of supporting capitalism, and recommended Russia implement a system of command socialism. In 1929, NEP was abolished, and replaced with a system of state-run agriculture and industry, organised via Five Year Plans. This system gave Stalin effective control over the entire economy, and thereby the Soviet people. ...read more.

Also extra labour needed in the new industrial ventures had been provided by the peasants whom had been forced off land. Even so by 1939, soviet agricultural production barely reached the level recorded in 1913. Industrialisation was also crucial in helping Stalin consolidate his power. He understood that he could not hope to rule without popular support. Power can only be acquired and retained by delivering benefits to significant numbers of people. In Stalin?s case, industrialisation shifted millions of people from the countryside to the cities, where jobs were plentiful and living standards higher than on state-run farms. Many of these people ? formerly illiterate peasants ? benefited from Stalin's rule. Through the 5 years plans, the USSR was ultimately turned into a modern state (which was able to resist Hitler's invasion). There was genuine Communist enthusiasm among the young ?Pioneers? and there were huge achievements in the following areas - new cities, hydroelectric power, transport & communications, the Moscow Underground, farm machinery, electricity, coal, steel, fertilizers and plastic.There was virtually no unemployment with massive investments in doctors & medicine and education. Industrialisation under the five year plans were not an unqualified success despite the claims of the propaganda machine. Some historians said the process was poorly organised and characterised by inefficiency, duplication of effort and waste. ...read more.

Although he probably ordered the assassination, Stalin used it as a chance to arrest thousands of his opponents. From 1934?1939, Stalin?s political opponents were put on ?Show trials?, where they pleaded guilty to impossible charges of treason (e.g. Zinoviev and Kamenev 1936/ Bukharin, Tomsky & Rykov 1938). In 1937, the Commander-in-Chief of the Red Army and 7 leading generals were shot. In 1938?39, all the admirals and half the Army?s officers were executed or imprisoned. Religious leaders imprisoned and churches closed down as Stalin enforced the ?Russification? of all the Soviet Union. Enemies of he State (In the eyes of Stalin and his supporters ? the ?Apparatchiks? , party members loyal to Stalin, who received special privileges such the new flats, jobs, holidays) were denounced/ arrested/ sent to the Gulag (the system of labour camps). In all 20 million Russians were sent to the camps, where perhaps half of them died. These measures from Stalin were successful in transforming Russia from a backward largely agricultural economy with limited industry to an emerging industrial force capable of meeting external threats from his enemies by 1941. His efforts to establish totalitarianism had been largely successful but the benefits in measurable terms for agriculture and industry were not without significant impact on Russia?s society and culture especially in terms of personal freedoms and the rights of individuals which had been made secondary to the needs of the state. ...read more.