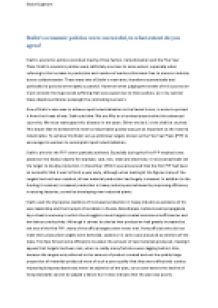 Stalins economic policies were successful, to what extent do you agree?

﻿Eloise Dugmore Stalin?s economic policies were successful, to what extent do you agree? Stalin?s economic policies consisted mainly of two factors, Collectivisation and the Five Year Plans. Stalin?s economic policies were definitely a success to some extent, especially when referring to the increase in production and number of workers that were free to move to industry due to collectivisation. These were two of Stalin?s main aims, therefore economically and politically his policies were highly successful. However when judging the extent of this success we must consider the huge social suffering that was caused due to these polices, as in my opinion these disastrous failures outweigh the contrasting success?s. One of Stalin?s aims was to achieve rapid industrialisation in the Soviet Union, in order to protect it from the threat of war. Stalin said that ?We are fifty or a hundred years behind the advanced countries. We must make good this distance in ten years. Either we do it, or we shall be crushed.? This shows that he believed the need to industrialise quickly was just as important as the need to industrialise. To achieve this Stalin set up ambitious targets known as the Five Year Plans (FYP) to encourage his workers to accomplish rapid industrialisation. Stalin?s aims for the FYP?s were partially achieved. Especially during the first FYP emphasis was placed on the heavy industry for example, coal, iron, steel and electricity. In most areas Stalin set the target to double production. ...read more.

This became very clear in the Stakhanovite movement, where the most efficient workers would be rewarded with luxury flats and copious amounts of food, whereas the other workers were living in their own squalor. As well as the over-achieving workers, party officials were also living the high life. 55,000 senior Communists were entitled to better food, better clothes and better accommodation to the average citizen. This was a mass divide that should not exist in any society, let alone a Socialist one. The Third FYP ended brusquely after three and a half years because of Russia?s entry to the Second World War. Largely, the Third FYP used the methods developed in the First FYP in war production, in an attempt to prepare Russia for war with Germany. However while the total number of war products increased significantly there were still many on-going problems with production methods and the quality of products produced. The Third FYP saw the increase of a new style of workers discipline which was now being used to ensure war production continued to rocket. This discipline was enforced by Stalin?s purges, which resulted in the removal or execution of many experienced industrial managers, leading to the chaos of the party that had characterised the First FYP. Between 1928 and 1941, Russia was transformed from a rural society to a highly industrialised one. Stalin?s objective had been to turn Russia into a world power, which he has succeeded in and many argue that without the FYP?s Russia would have been defeated by Germany. ...read more.

Politically, the chaos created by collectivisation in some way had managed to unite the party and made them feel stronger than before. Stalin had also emerged as a powerful leader and his capability was no longer doubted. Also the population was urbanised which was one of the main aims of collectivisation. However the famine and poverty in the countryside had created a feeling of crisis among many of the communist party. Although there were many successes of collectivisation, and it had created a fund to begin industrialisation and made Stalin appear as a strong and powerful leader, it had had a devastating effect on Russia?s peasantry. 10,000,000 people had been exiled as part of the dekulakisation drive. In 1929 150,00 Kulak families were sent to Siberia, this figure then rose again to 285,000 in 1931. The peasants who now worked on the new collectivised farms endured humungous hardship. They were constantly set unrealistic targets and paid low wages for the mass of crops that were produced. Most farms were barely able to cover their production costs and instead of filling them with communist spirit and preparing them for industrialisation, it created anger and vast resentment towards the new leader. Grain requisitioning caused 7 million peasants to die of famine, and along with many farms being collectivised came mass unemployment. In conclusion, Stalin?s economic policies were a personal and a propaganda success, whereas in reality they had had detrimental effects on the Russian population. Many of Stalin?s aims were met and to him that was all that mattered. He refused to acknowledge the mass suffering that his new economic policies had created. ...read more.