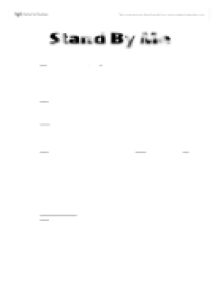 Stand By Me is a film based on the story The Body by Stephen King it is about four 12 years old boys in a small town in USA.

Stand By Me is a film based on the story The Body by Stephen King it is about four 12 years old boys in a small town in USA. They set off on secret journey to look for a died body together and learn about danger, fear and friendship. Stephen King was famous for his Novellas and the big hit Stand By Me it sold about 2000 copies. Biography of Stephen King: Stephen Edwin King was born in Portland, Maine in 1947, the youngest of two sons. Apart from being raised without a father from the age of three, Stephen experienced a normal childhood. He enjoyed playing for his high school football team and was an enthusiastic member of a small rock band. Since then, Stephen King has written numerous novels and short stories, taking few breaks in-between. His tales have been made into more than thirty feature length films, most of which have been relatively successful. ...read more.

He is trying to come term with his losses but his parents do not seem able to help him, in fact they cannot seem to recover for the terrible accident either he thinks that his parent are blanking him and as a result Gordie feel they had rather he had died instead of his brother. In the course of the film they discovered the closeness of death. There were many sense which was close to death like when Teddy the daredevil tried to doge the train but Chris pushed Teddy out of the way the other scene was The Railway Bridge, the boys had two ways to go the one which would of took 40minites or the 10minites journey The boys decide to cross over the bridge and take their chance. Teddy and Chris go first while Gordie hangs back with Vern. ...read more.

you candy-asses halfway across the state and back, I'll be waiting for you on the other side relaxing with my thoughts and Gordie says "you use your left hand or your right hand for that"? The end of the film Chris has a fight with a bunch of boys, which wanted the died body as well, but Gordie had a gun and threatened to shot him if he didn't leave Chris alone, but he didn't believe him so he carried on so Gordie fired a warning shot that's when the bunch of hooligans started to walk away it was astounding because you can see how close friends there are. What they did was extraordinary and breathtaking because instead of taking the body back to the police and being rich which they came for they gave it a funeral. I think the film Stand By Me was extraordinary the film is about fear, how teenagers are like and most of all friendship. ...read more.