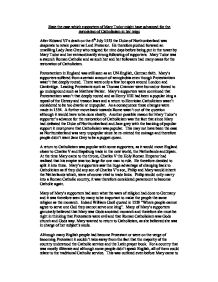 State the case which supporters of Mary Tudor might have advanced for the restoration of Catholicism in her reign After Edward VI's death on the 6th July 1553 the Duke of Northumberland was desperate to retain power as Lord Protector. He therefore pushed forward an unwilling Lady Jane Grey who reigned for nine days before being put in the tower by Mary Tudor and her extraordinarily strong following of supporters. Mary Tudor was a staunch Roman Catholic and as such her and her followers had many cases for the restoration of Catholicism. Protestantism in England was still seen as an UN-English, German faith. Mary's supporters suffered from a certain amount of xenophobia even though Protestantism wasn't that deeply routed. There were only a few hot spots around London and Cambridge. ...read more.

A return to Catholicism was popular with some supporters, as it would move England closer to Charles V and Hapsburg trade in the new world, the Netherlands and Spain. At the time Mary came to the throne, Charles V the Holy Roman Emperor had realised that his empire was too large for one man to rule. He therefore decided to split it into three. Mary's supporters saw the huge advantage of changing back to Catholicism as if they did any son of Charles V's son, Philip and Mary would inherit the Netherlands which, were of course vital to trade links. Philip would only marry into a Roman Catholic country, it was therefore considered paramount to become Catholic again. Many of Mary's supporters had seen what the wars of religion had done to Germany and it was therefore seen by many to be important to make the people the same religion as the monarch. ...read more.

This was outlined even before Mary came to the throne with the Cornish rising of 1549 where the English prayer book was described as " a Christmas game". For those of Mary's supporters who wanted a return to Catholicism for moral reasons their main driving force was the idea that the people didn't really want to be Protestant in the first place. New supporters of Mary and members of the council furiously threw themselves into the promotion of Catholicism to avoid being associated with the Duke of Northumberland, the Jane Grey plot or the changing of Edward VI's will to exclude Mary from the succession. There was a number of reasons for the advancement of the restoration of Catholicism however it may have been pushed forward and publicised that Mary was "saving her subjects souls", although Mary may have believed this very few of her supporters could see further than their own gains. ...read more.