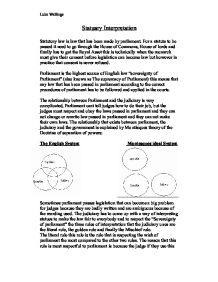 Statuary Interpretation Statutory law is law that has been made by parliament. For a statute to be passed it need to go through the House of Commons, House of lords and finally has to get the Royal Asset this is technically when the monarch must give their consent before legislation can become law but however in practice that consent is never refused. Parliament is the highest source of English law "sovereignty of Parliament" (also known as The supremacy of Parliament) this means that any law that has been passed in parliament according to the correct procedures of parliament has to be followed and applied in the courts. The relationship between Parliament and the judiciary is very complicated, Parliament cant tell judges how to do their job, but the judges must respect and obey the laws passed in parliament and they can not change or rewrite law passed in parliament and they can not make their own laws. The relationship that exists between parliament, the judiciary and the government is explained by Montisques theory of the Doctrine of separation of powers: The English System Montesques ideal System Sometimes parliament passes legislation that can become a big problem for judges because they are badly written and are ambiguous because of the wording used. The judiciary has to come up with a way of interpreting statues to make the law fair to everybody and to respect the "Sovereignty of parliament" ...read more.

This case was important because in the mid-19th century a parallel doctrine of interpretation started to develop. This asserted that the "literal rule" should be used unless it would lead to an absurdity. The golden rule is only used if the literal meaning makes an obscured outcome to a case in which parliament would not of intended. The golden rule can be used by judges to substitute a phase or word to make the rest of the Act make sense and so as it is used to get a reasonable outcome to a case if the literal meaning could lead to an obscured result. A case that gives a good example of when the "Golden Rule" was used is the R V Allen (1872) case in which a man had committed bigamy and under S.57 Offences against the person Act 1861 Which states "A person who is married and Marries Again". If the Judge in this case took the literal meaning of the phrase the defendant would not of been found guilty of getting married twice. The reason for this is because when somebody is married it is impossible for him or her to get married again by law. In this case the judge changed to phrase to "having gone through a ceremony of marriage" so the defendant was found guilty. ...read more.