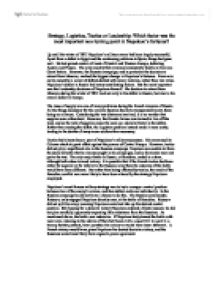 Strategy, Logistics, Tactics or Leadership: Which factor was the most important as a turning point in Napoleon's fortunes?

Strategy, Logistics, Tactics or Leadership: Which factor was the most important as a turning point in Napoleon's fortunes? Up until the winter of 1812 Napoleon's military career had been largely successful. Apart from a defeat in Egypt and the continuing problems in Spain, things had gone well. He had gained control of most of Central and Western Europe, defeating Austria and Prussia. The only country that remained consistently hostile to him was Great Britain. However, the Russian campaign, and in particular the decision to retreat from Moscow, marked the biggest change in Napoleon's fortunes. From now on his would be a career of defeats dotted with minor victories, rather than vice versa. Napoleon's defeat in Russia had many contributing factors. But the most important was the Leadership decisions of Napoleon himself. His decision to retreat from Moscow during the winter of 1812 lead not only to his defeat in Russia, but also to his overall defeat in Europe. The issue of supply was one of many problems during the French invasion of Russia. All the things necessary for the army to function had to be transported by cart, there being no railways. ...read more.

Napoleon's most famous military strategy was to try to occupy a central position between two of the enemy's armies, and then defeat each one individually. In the Russian campaign he did not have a chance to do this. The Russian commander, Kutusov, only engaged Napoleon directly once, at the battle of Borodino. Kutusov did not split his army; meaning Napoleon could not take up his desired central position. Still hoping for a decisive victory Napoleon ordered a frontal assault, he did not plan carefully, apparently expecting little resistance from the Russians. As mentioned above, the battle was indecisive. If Napoleon had planned the battle with more care, listening to the advice of Marshal Davout who urged him to send in a strong flanking attack, then possibly the outcome would have been different. A French victory would have given Napoleon his desired decisive victory, and the Russians would most likely have signed a peace agreement. In terms of Grand strategy, the initial decision to invade Russia can be seen as very important. If this decision had not been made, the Grande Armee would have remained intact, and Napoleon's fate could have been very different. ...read more.

His campaigns in Spain also contributed significantly to his eventual defeat. Ever since the French occupation of Spain in 1807, the forces stationed there had been under constant attack from Spanish Guerrillas, who accounted for 100 deaths per day during the French occupation. Although these losses not as rapid or on the same scale as the defeat in Russia, they were a constant drain on Napoleon's resources. Napoleon also suffered an early defeat in Egypt, where the Royal Navy prevented a victory. But this early campaign was less important than those that came later, and didn't affect his career in any significant way. The largest factor contributing to Napoleon's eventual defeat in Europe was his failed invasion of Russia. The Grande Armee's strategies and tactics were only put to the test once, at the battle of Borodino, where the outcome was indecisive. Therefore they did not play a significant role in their eventual defeat. Logistics played a part in increasing the losses of Napoleon's forces, but alone it did not have a major effect on the outcome of the campaign. Napoleon's invasion failed mainly because of his decision to retreat from Moscow at the end of 1812, instead of garrisoning his troops there for the winter. This decision was based on Napoleon's personality and leadership traits. ...read more.