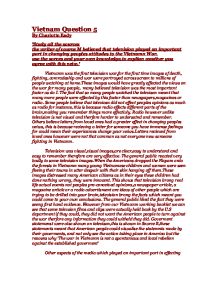 'Study all the sources - the writer of source M believed that television played an important part in changing peoples attitudes to the Vietnam War - use the sorces and your own knowledge,to explian weather you agree with this veiw.'

Vietnam Question 5 By Charlotte Eady 'Study all the sources the writer of cource M believed that television played an important part in changing peoples attitudes to the Vietnamn War. use the sorces and your own knowledge,to explian weather you agree with this veiw.' Vietnamn was the first television war,for the first time images of death, fighting, comradeship and war were portrayed across screen to millions of people watching at home.These images would have greatly effected the views on the war for many people, many believed television was the most important factor as do I. The fact that so many people watched the televison meant that many more people were effected by this factor than newspapers,magazines or radio. Some people believe that televiosn did not effect peoples opinions as much as radio for instance, this is becasue radio effects different parts of the brain,making you remember things more effectivly. Radio however unlike television is not visual and therfore harder to undersatnd and remember. Others believe letters from loved ones had a greater effect in changing peoples veiws, this is because recieving a letter for someone you have immense feelings for could mean their expericances change your veiws.Letters recieved from loved ones however were not that common as not everyone new someone fighting in Vietnamn. ...read more.

Magazines are a major influence as they are a form of entertainment which informs and makes money. They are a major influence on the public as it is their aim. In many ways they are more useful than televsion as everyone is able to get a magazine were as not everyone has a television at this time.Some magazines however are biased and mainly peoples full of peoples pre conceived opinions. For example source G may have twisted its facts to help influence the public in favour of the American goverment. Some magazines also include cartoons, these cartoons are very good as they are very good at entertaining and getting across a certain point. Cartoons manage to grab attention easier than a large section of writing does. Source L shows that cartoons can be influential in themselves as they normally humorous. Cartoon's stand out and clearly makes a point. Source L shows a cartoon with many teachings, it shows that however much the Americans may try and influence the Vietnamese people they are just not suited to a capitalist lifestyle. It also portrays America as a Buisness man trying to sell something to someone who does not want what they have to offer. ...read more.

to effect them.The economic cost of war was also a very important influential factor.It changed many peoples opinions as they had first hand effects on it, the huge costs caused inflation which became a bigger problem than war itself. The general public found themselves paying more for goods in order to pay for the cost of the war, this impacted the public opinion because as well as many of lives of troops being lost, the lives of those in the US were being effected financially. This created negativity towards the war in Vietnamn and many people became apposed to the war. After looking at all the information i can still conclude that i believe that television was the most important factor in influencing and changing people's attitude towards the Vietnamese War. Although there were many other factors which played important parts in affecting the US public opinion television seemed to deliver most of the important information which was responsible for changing the people's attitude towards the war in Vietnamn. It was by far the most efficient, clearest and understandable method of getting clear visual images and news to the public , this meant it had the greatest influence, much greater than slower methods of media. ...read more.