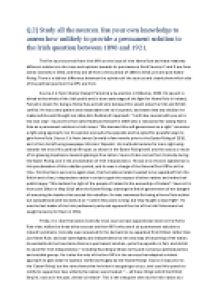 Study all the sources. Use your own knowledge to assess how unlikely a permanent solution to the Irish question was between 1890 and 1921

﻿Q.2) Study all the sources. Use your own knowledge to assess how unlikely to provide a permanent solution to the Irish question between 1890 and 1921. The five sources are all from Irish MPs on the issue of Irish Home Rule and have relatively different solutions to the issue and opinions towards its permanence. Both Sources C and D are from James Connolly in 1916, and they are all from a time period of 1890 to 1916, pre and post Easter Rising. There is a distinct difference between the opinions of the sources and clearly show which side of the political spectrum the MPs are from. Source A is from Charles Stewart Parnell at a by-election in Killkenny, 1890. His speech is aimed at the whole of the Irish public and is at an early stage of the fight for Home Rule in Ireland; Parnell is known for being a Home Rule activist who believed this would solve the Irish and British conflict. He has a very patient and reasonable tone to his speech, and states that any decision he makes will be well thought out alike John Redmond?s approach: ?I will take counsel with you as to the next stop?. Source B is from John Redmond himself in 1907 who is renowned for seeing Home Rule as a permanent solution to Irish issues. ...read more.

He is also the only of the four MPs in the sources that adopted a violent approach to gain what he wanted, reinforced hugely by the ?Easter Rising?. Source C was prior to the ?Easter Rising? but the tone shows that he knew it was going to occur, and used this speech to notify his supporters how unfairly the nation were treated: ?? all those things which the British Empire, now as in the past, denies to Ireland?. This is the viewpoint seen by the Irish nation as a whole, but Connolly saw different solutions to his oppositional political members. Source E is from John Dillon after the events at the ?Easter Rising? and had a sympathetic tone towards Connolly?s actions as he saw that he was doing what he thought was best for Ireland. He also warns Britain of the consequences of executing Connolly and the six other signatories of the proclamation, which connotes his civil and peaceful approach towards the Home Rule Bill. Dillon is another example of a left-wing, Home Rule activist at this time and does not want a rebellion of any sorts in the nation but sympathises with those who do: ?? the rebellion are now becoming infuriated against the government on account of these executions?? He does, however, show that the overly ambitious approach of Connolly?s was unsuccessful and that the nation should settle for Home Rule alone and not become too demanding or they may end up in the position of becoming executed themselves. ...read more.

In conclusion, the only political member from these sources that felt Home Rule would not be a permanent solution was James Connolly. He is also the only of the four to use right-wing methods and his speech was made at a time just a couple of months prior to his most radical movement of all ? Easter Rising 1916. John Dillon tends to sympathise with Connolly?s actions at the Easter Rising, but this may be a ploy to gain support from the right-wing supporters who would be left without a leader if the executions went ahead ? which they did. He wanted Ireland to use civil and peaceful methods to gain Home Rule rather than the violent approaches they had used at that time. Both John Redmond and Charles Stewart Parnell?s speeches were very pro-Home Rule, and were made before the third Home Bill was established and the start of the First World War. An important aspect of these speeches was that both MPs were patient about the potential of Home Rule and made them at a time before necessary action needed to be taken, hence choosing a speech rather than a rally or riot as the mode. The difference between the two political members was that Redmond was in a very strong position whereas Parnell had ever-decreasing supporters and had calls of retirement against his name. ...read more.