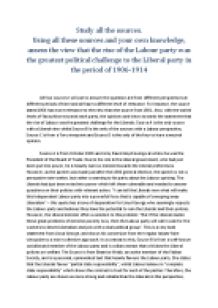 Study all the sources. Using all these sources and your own knowledge, assess the view that the rise of the Labour party was the greatest political challenge to the Liberal party in the period of 1906-1914

﻿Study all the sources. Using all these sources and your own knowledge, assess the view that the rise of the Labour party was the greatest political challenge to the Liberal party in the period of 1906-1914 All four sources I will use to answer the question are from different perspectives at different periods of time and all have a different level of relevance. For instance, the source dated 1906 has more relevance to the view than the source from 1981. Also, with the varied levels of favouritism towards each party, the opinions and views towards the statement that the rise of Labour was the greatest challenge for the Liberals. Source A is the only source with a Liberal view whilst Source B is the only of the sources with a Labour perspective; Source C is from a Tory viewpoint and Source D is the only of the four to have a neutral opinion. Source A is from October 1906 and is by David Lloyd George at a time he was the President of the Board of Trade. Due to his role in the Liberal government, who had just been put into power, he is heavily narrow-minded towards the Liberal preferences. However, as the speech was made just after the 1906 general election, the speech is not a persuasive vote-seeker, but rather a warning to his party about the Labour uprising. The Liberals had just been voted into power which left them vulnerable and needed to answer questions on their policies with relevant action. ?I can tell the Liberals now what will make this Independent Labour party into a powerful force that is capable of sweeping away Liberalism? ? this quote has a tone of desperation for Lloyd George who seemingly respects the Labour party and believes they have the potential to ruin the Liberals and their policies. However, the Liberal minister offers a solution to this problem: ?But if the Liberals tackle these great problems of extreme poverty now, then the Labour party will call in vain for the workers to desert Liberalism and join with a rival political group?. ...read more.

who could not break the deadlock with the Conservatives seen in the January 1910 election - did not get a majority vote and went on to form a coalition with the Irish Nationalists in return for their policy of the ?home rule?. The fact that the Liberals were unable to get a majority of seats in the House of Common proved to be worry for Lloyd George. Between 1906 ? the date source A was produced - and the time of this source - 1911, the Liberals produced several reforms that targeted large sections of the public ? i.e. the Old Age Pensions Act and People?s Budget amongst others. The choice of mode for the text ? a diary ? meant that Webb?s views were not able to be spread nationwide and makes it seem more personal, whilst Lloyd George?s speech was exposed nationally and was intended to do so. For this reason, Source A seems to be more effective than B in showing how the Liberals planned to deal with the problems they faced rather than Beatrice Webb?s personal document. This Source was produced at a similar time to Source C ? a satirical piece of propaganda from weekly magazine Punch in 1912 so therefore this was also after the two General Elections of 1910. The 1910 election saw the number of Conservative MPs voted in rise from 156 to 271, whilst Liberals decreased from 397 to 272 ? therefore a coalition was created between the Liberals and Irish Nationalists. The message of the source is that the Conservatives gained from the conflict between the Liberal and Labour parties in reference to the General Election that had just previously occurred. The caption is ?The Triangular Test? referring to the ongoing battle between the three parties, and creates the idea that the Labour party did not only ruin Liberals amount of votes, but its own through its disputes with the Liberals. ...read more.

The general overview of the Source is that the Labour party had the opportunity to gain from the declining Liberal party, who were losing many working-class voters and becoming increasingly unpopular. This therefore connotes that the Conservatives gained voters that their policies were not aimed at in the slightest, which shows a real disturbance to the equilibrium of the government. Not only did the Liberal party decline, but the alleged uprising of the Labour party wasn?t effective and did not gain voters in the areas it should have. With the working-class favouring the upper-class approaches, this shows that the country was in a real state and the calling for a new government was certainly valid. Although Lloyd George predicted a Labour uprising, and changed his approach to abolish this, the Labour party still had a negative impact on the Liberal party?s electoral campaigns. However, these conflicts between the Labour and Liberal parties were in-fact beneficial for the Conservative party who gained votes and MPs. They took a professional approach whilst the Labour and Liberal parties conflicted with one another, and this created a sense of reassurance and security for their supporters. Nevertheless, this decline was created by the threat of the Labour party, and although they did not capitalise from the downfall, they did have a negative impact on the Liberal?s chances. I believe that the greatest challenge for the Liberals was the Labour uprising as it forced them into changing their approach, pushing through policies/reforms and consequently lost them votes and was forced into forming a coalition in the December 1910 General Election. The Liberal party went from a strong force to a vulnerable government in a matter of a few years, and this was because of the Labour impact and a decrease in votes. In summary, the Conservatives may have benefited from the Labour impact on the Liberal downfall, but the Labour party were the cause of this. ...read more.