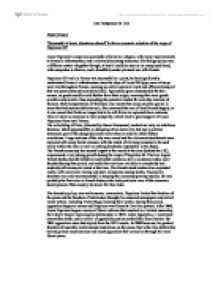 &quot;Successful at home, disastrous abroad&quot; Is this an accurate valuation of the reign of Napoleon III?

History Essay: "Successful at home, disastrous abroad" Is this an accurate valuation of the reign of Napoleon III? Louis Napoleon's reign was successful at home to a degree, with many improvements to France's infrastructure, and a relatively booming economy. His foreign policy was a different matter altogether though; at best it could be seen as an overplayed hand; with escapades in Mexico, and a dreadfully under-planned war with Prussia. Napoleon III's rule in France was successful to a point; he had significantly modernised France's infrastructure since the days of Louis Phillippe; new railways were laid throughout France, opening up entire regions to rapid and efficient transport that was previously entirely unavailable. Agriculture grew considerably for this reason, as goods could be sold further from their origin, meaning that more goods could be sold in total, thus expanding the potential market for even the smallest of farmers. Bulk transportation of fertilisers also meant that crops could be grown in areas that had nutrient deficient soil; this increased the area of land farmed hugely, as it also meant that fields no longer had to be left fallow to replenish their nutrients. ...read more.

In 1868 however, he granted freedom of assembly and loosened restrictions on the press. But in the time before this he had gained many enemies and much opposition that carried on through his more liberal years. Although his foreign policy is seen to be nothing but overplayed hands, naivety, and blind attempts for glory, Napoleon III did have the odd successful escapade abroad. The Crimean War of 1854-1860 saw France at war against the Russians with Britain, the Ottoman Empire, and the kingdom of Sardinia. This was a resounding success, with an early victory for the alliance, and Napoleon III acting as the middleman in the Treaty of Paris. Their success was not limited to the one occasion however. A brief but decidedly positive result in Vietnam showed the French as the dominant ruling power. In 1859 France went to war again with the kingdom of Sardinia in order to eject Austria from Italy. Although France received Nice and Savoy in 1860 in return for her efforts, the French intervention created other problems. The war was a costly one, and Napoleon had not foreseen the possibility that Italy would unite; creating another European power with which France must contend. ...read more.

Bismarck ensured this telegram was released in French newspapers. The French were outraged, and Napoleon fell into Bismarck's trap and declared war. France was horrifically under-prepared, and the geriatric Napoleon III led the out-dated French army into battle on his horse, whilst suffering from gallstones and piles. They were defeated swiftly, Napoleon was captured, and Paris was too after a long and hard siege. The French were forced to pay enormous reparations, and Napoleon was forced into exile. All in all, Napoleon's domestic policy was very effective; he modernised France industrially, and built an infrastructure that competed with other European nations. The expansion of railways helped modernise farming methods and increase rural prosperity greatly. Although not a model example of a liberal leader (his censorship, and political imprisonments rule out any such title), his domestic policy was very effective. His foreign policy was what lead to his demise; although he was successful in Crimea, his escapades in Mexico were utterly humiliating, and his downfall in the Franco-Prussian war was caused by a catalogue of horrendously arrogant, blind, and predictable mistakes, all planned by the more politically adept Bismarck. Napoleon was out-witted, out-gunned and out-schemed, and no degree domestic success could redeem him from it. ...read more.