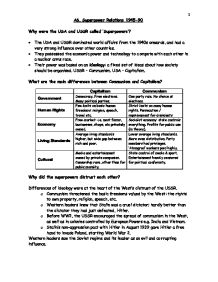 A6. Superpower Relations 1945-90 Why were the USA and USSR called 'Superpowers'? * The USA and USSR dominated world affairs from the 1940s onwards, and had a very strong influence over other countries. * They possessed the economic power and technology to compete with each other in a nuclear arms race. * Their power was based on an ideology: a fixed set of ideas about how society should be organised. USSR - Communism. USA - Capitalism. What are the main differences between Communism and Capitalism? Capitalism Communism Government Democracy. Free elections. Many political parties. One party rule. No choice at elections. Human Rights Few limits on basic human freedoms: religion, speech, travel etc. Strict limits on many human rights. Persecution / imprisonment for dissidents Economy Free-market: i.e. most farms, businesses, shops, etc privately owned. Socialist economy: state controls everything. Profits for public use (in theory). Living Standards Average living standards higher, but wide gap between rich and poor. Lower average living standards. More even distribution. Party members had privileges. 'Atomgrad' workers paid highly. Cultural Media and entertainment owned by private companies. Censorship rare, other than for public morality. State control of media & sport. Entertainment heavily censored for political conformity. Why did the superpowers distrust each other? Differences of ideology were at the heart of the West's distrust of the USSR. o Communism threatened the basic freedoms valued by the West: the rights to own property, religion, speech, etc. o Western leaders knew that Stalin was a cruel dictator; hardly better than the dictator they had just defeated, Hitler. o Before WW2, the USSR encouraged the spread of communism in the West, as well as in colonies controlled by European Powers e.g. India and Vietnam. o Stalin's non-aggression pact with Hitler in August 1939 gave Hitler a free hand to invade Poland, starting World War 2. Western leaders saw the Soviet regime and its leader as an evil and corrupting influence. ...read more.

The pilot Gary Powers was put on trial in Moscow. This occurred during a Summit Meeting of important countries in Paris. Khrushchev was able to use the incident to embarrass the USA and stormed out of the meeting. 4. Why did Khrushchev order the building of the Berlin Wall? Khrushchev needed to stop the flow of Eastern European defectors to the West. * It had always been possible for Berliners to travel from one part of the city to another. Many worked in one sector and lived in another. It was easy for them to see what life was like on the other side. * Many thousands of people had escaped from East to West, since the end of the Blockade in May 1949. On average, between 20-25,000 each month. * Most defectors were well educated; engineers, teachers, doctors, lecturers. They were just the sort of people that the Communist Bloc could not afford to lose as it tried to modernise its industry and agriculture. * In November 1958 Khrushchev demanded that the three western powers should leave West Berlin. The West refused and called for talks on the reunification of East and West Germany. (In fact at the Rome Olympics in 1960 there was a united German team.) * Khrushchev refused to discuss unification and in April 1960 threatened another blockade. * In September 1960 East Germany forced West Berliners who wanted to travel to East Berlin to obtain a police pass. This was the first time that any restriction had been placed on travel between the four sectors in Berlin. Khrushchev thought the new US President, Kennedy was weak. * After the U2 incident and Kennedy's disastrous attempt to invade Cuba (see page 14, Khrushchev came to the conclusion that Kennedy could be pushed around. He decided that the time was right to cut West Berlin off from East Berlin * Finally, on 13 August 1961, the East German government closed the border between east and West Berlin and on 15 August began to build the Berlin Wall. ...read more.

The Warsaw Pact The Warsaw Pact had kept individual Eastern European countries from introducing reform or change throughout the Cold War. After 1985, Gorbachev was no longer prepared to use Soviet or Warsaw Pact forces to control the individual states. This meant that the old regimes could offer little defence against mass popular action. In 1989, Soviet troops were withdrawn from Lithuania, Latvia and Estonia, and the countries became independent again. This only increased the pressure for change in the rest of Eastern Europe. * In 1989 Communist rule collapsed in Poland and Lech Walesa, leader of Solidarity became President in 1990 after the first free elections. * In September 1989 Hungary opened its borders with Austria and East Germany opened its borders with Austria. Massive numbers of refugees began to flood west. * To try and stem the flood, the East German announced that people could travel abroad freely. The popular reaction was, on the weekend of 11-12th November, to tear down the Berlin Wall with hammers and chisels. * In November 1989 the Communist governments of East Germany, Czechoslovakia and Bulgaria all resigned. * In December 1989 Ceausescu, the Romanian dictator was overthrown and shot. In December Gorbachev met George Bush, the new US president and they declared that the Cold War was over. Epilogue In 1990 East and West Germany were reunited. After further talks, in 1991, the USA and USSR signed START (Strategic Arms Limitation Treaty), getting rid of 8500 nuclear warheads in total. Meanwhile in the Soviet Union, one after another of the 15 member states demanded their independence, so that by the end of 1991 the Soviet Union no longer existed. Although the Cold War had ended, old problems reappeared: with the break up of Yugoslavia, terrible civil wars broke out in Croatia (1991-2) and Bosnia (1992). 1 Submarine-launched ballistic missile 2 When a treaty is made law by the parliaments of each country. 3 Sometimes called 'spheres of influence'. Iran and Angola had been places where western influences were strong. 4 Marxist is another word for Communist. 1 1 ...read more.