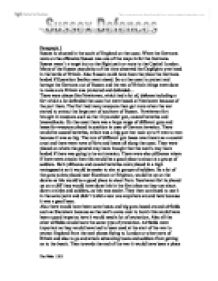 Sussex defences. Sussex is situated in the south of England on the coast. When the Germans were on the offensive Sussex was one of the ways in for the Germans. Sussex wasn't a target but on the flight path or route to the Capital London.

Paragraph 1 Sussex is situated in the south of England on the coast. When the Germans were on the offensive Sussex was one of the ways in for the Germans. Sussex wasn't a target but on the flight path or route to the Capital London. Many of the Sussex population of the time observed the Dogfights over head in the battle of Britain. Also Sussex could have been the place the Germans landed if Operation Sealion went ahead. So on the coast to protect and barrage the Germans out of Sussex and the rest of Britain things were done to make sure Britain was protected and defended... There were places like Newhaven, which had a lot of, defense including a fort which a lot defended the coast but were based at Newhaven because of the port there. The Fort had many weapons then got more when the war started to protect the large part of southern of Sussex. ...read more.

So a lot of the guns points placed near Shoreham or Brighton, would be up on the downs as this would be a good place to shoot from. Newhaven fort is placed up on a cliff they would have done this in the first place so they can shoot down at ships and soldiers, as this was easier. They then continued to use it in the same point and didn't build a new one anywhere around here because it was a good base. Also there would have been some bases and big guns based around airfields such as Shoreham because as the nazi's came over to bomb this would have been a good target so here it would need a lot of protection. Also all the other airfields would have the same type of protection. Airfields were important as they would have had to been used at the start of the war to protect England from the nazi planes flying to London or other parts of Britain and also to go and attack advancing boats and soldiers from getting on to the beach. ...read more.

These beaches would have been the places the Germans would have landed on once they have got to the top of France. Towards the end of the war the role of these counties changed from defense to a place where the British soldiers would have trained and taken off from to go to France. I think that the most important places in Sussex which helped us win the war were the towns and villages on the Coast with beaches and flat land behind because these would have been targets to land on if there was an invasion for the Germans. Towns with airfields and ports as these are vital for defense and attacking. Also there were places more in coast which if the Germans would have got past the beaches would stop them from advancing anymore. So, I think that Sussex was one of the most important if not the most important areas in the struggle of defending Britain and attacking the nazi's and would have been very well protected. Tim Wake 11RH ...read more.