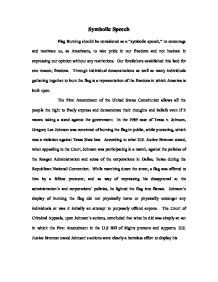 Symbolic Speech Flag Burning should be considered as a "symbolic speech," to encourage and motivate us, as Americans, to take pride in our freedom and not hesitate in expressing our opinion without any restrictions. Our forefathers established this land for one reason; freedom. Through individual demonstrations as well as many individuals gathering together to burn the flag is a representation of the freedom in which America is built upon. The First Amendment of the United States Constitution allows all the people the right to freely express and demonstrate their thoughts and beliefs even if it means taking a stand against the government. In the 1989 case of Texas v. Johnson, Gregory Lee Johnson was convicted of burning the flag in public, while protesting, which was a violation against Texas State law. According to what U.S. Justice Brennan stated, when appealing to the Court, Johnson was participating in a march, against the policies of the Reagan Administration and some of the corporations in Dallas, Texas during the Republican National Convention. While marching down the street, a flag was offered to him by a fellow protester, and as way of expressing his disapproval to the administration's and corporations' policies, he lighted the flag into flames. ...read more.

Because of the shortage of volunteers to serve in the army, many young men were drafted into the war. They were not happy about this, and they protested against the drafts. Thus, according to Bexte, Anti-war movements were formed and in addition to striking against the drafts. People also went against bombing innocent villages and killing innocent people in Vietnam. The protesters, representing the citizens and the principle of a free America, held non-violent, anti-war rallies, concerts, speeches, and marched through the streets as well as burning the flag. Protesters of the Vietnam War took action in displaying their beliefs. Burning the flag challenged the choices made by the government, which proved that they were deeply concerned for the freedom and justice of the people. Flag Burning had a greater impact on influencing people compared to just expressing them in words. They expressed that the people should have the greater impact when making decisions in America. In other words, flag burning was a way of showing the government the disapproval of the people. Vietnam War protesters took responsibility as Americans to demonstrate that the people of the nation should be the decision makers in the government. ...read more.

The more we psychologically accept the flag to possess such symbolic meaning, the more we believe that burning the flag is disrespecting the nation. Burning the flag merely represents opposition or rebellion of certain actions taken by the government; it does not mean we want to destroy the symbolic meaning it can portray of our nation. The flag is simply a flag and throughout history, citizens of this country have been demonstrating the burning of the flag to promote the primary principal of our nation - freedom. Their devotion and loyalty to out country led them to protesting and in doing so, has encouraged us to take a stand for what we believe in. If flag burning was not allowed, this country would be contradicting its freedom. Displays of burning the flag should be an open option to express one's beliefs in the United States; after all, we do live in a free country. Sources: Apel, Warren S. "History of Flag Burning" The Flag Burning Page Online: 09/21/02 http://www.esquilax.com/flag Perkel, Marc. "Flag Burning is our Patriotic Duty" The Duty of the People to Burn the Flag Online: 09/21/02 http://www.flagburning.org Bexte, Martina. "The Vietnam War Protests" PageWise, Inc. Online: 09/21/02 http://www.ohoh.essortment.com/vietnamwarprot_ricz.htm ...read more.