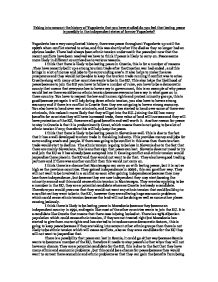 Taking into account the history of Yugoslavia that you have studied do you feel that lasting peace is possibly in the independent states of former Yugoslavia?

Taking into account the history of Yugoslavia that you have studied do you feel that lasting peace is possibly in the independent states of former Yugoslavia? Yugoslavia has a very complicated history, there was peace throughout Yugoslavia up until the 1980's when conflict started to arise, and this was shortly after Tito died as they no longer had an obvious leader. There had always been ethnic tension underneath the peace but now that the recent conflicts have been resolved we have to think if peace is likely to carry on. Peace seems more likely in different countries due to various reasons. I think that there is likely to be lasting peace in Croatia, this is for a number of reasons .They have recently built up a strong tourism trade after the Croatian war had ended , and this brings in a lot of money and jobs to the surrounding area's. It also helps to make the area prosperous and they would not be able to keep the tourism trade running if conflict was to arise. Croatia along with many other countries wants to be in the EU. This also helps the likelihood of peace because to join the EU you have to follow a number of rules, you have to be a democratic county that means that everyone has to have a say in government, this is an example of why peace would last as there would be no ethnic tension because everyone has a say in what goes on in there country. ...read more.

There is a possibility that peace can last in Bosnia, it could go either way because Bosnia wants to become a member of the EU, therefore It needs to stay peaceful other whys they will not have any chance. They are a potential candidate for the EU, this is due to the fact that they have many ethnic and economic problems , but this could be a chance for peace because they would want to correct there economic and ethnic problems so that they can gain the benefits from being in the EU. However, Bosnia feels as if it was put under pressure by powerful countries such as the United States to sign the Dayton agreement so that there was no longer a war and to try and keep the war crimes down, therefore they are living in a forced peace. The president of the Bosnian Serb parliament felt that the agreement did not even meet the minimum of there interests. We can see that there were problems even after that agreement was signed, in a town called Brcko. Brcko straddles land and water routes between central Europe and the Balkans, the mainly Muslim population was once purged by Serbs and the question of its future almost destroyed the Dayton agreement. Both sides threatened to go to war over the town. There are many other problems as well which cause bad feeling in Bosnia , an example of a problem would be the issues to do with the mass murders of civilians and the attempts to put people of guilty of serious war ...read more.

In conclusion I think that the possibility of peace in Yugoslavia is unlikely however I think some countries may be able to keep peace but there is to many larger problems in other area's. I think Croatia will be able to keep peace as joining the EU is a very important matter to them , therefore they would not want to jeopardize there case , I think this is the same in many of the other countries , for instance Macedonia has only just become an independent country , and again they want to join the EU , they are also started to listen to the view of different ethnic groups which is going to keep the peace. I do not believed that there can be peace in Bosnia because the Dayton agreement which has kept the peace so far was only signed due to the forcefulness of the other countries such as the united states , I also don't believed that there can be peace in Kosovo or Serbia because there is to much resentment due to the fact that Serbia will not give up the control of Kosovo , however I think that if the war criminals are captured and bought to justice then there is going to more possibly of peace between the two countries but unless that happens soon then I don't think there is any chance that there will be peace in Kosovo or Serbia , so altogether I think that there will be some sort of conflict between the different ethnic groups in Yugoslavia. ...read more.