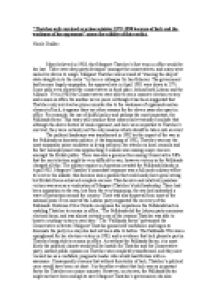 Thatcher only survived as prime minister 1979-1990 because of luck and the weakness of her opponents assess the validity of this verdict.

﻿?Thatcher only survived as prime minister 1979-1990 because of luck and the weakness of her opponents? assess the validity of this verdict. Nicole Guilder Many believed in 1983, that Margaret Thatcher?s first term in office would be her last. There were deep party divisions? amongst the conservatives, and many were sacked or driven to resign. Margaret Thatcher was accused of ?steering the ship of state straight on to the rocks.? by her ex colleague Sir Ian Gilmour. The government had become hugely unpopular, the approval rate in April 1981 were down to 27%. Some polls even showed the conservatives in third place, behind both Labour and the Alliance. Yet in 1983 the Conservatives were able to win a massive election victory and remain in office for another seven years. Although it has been suggested that Thatcher only survived as prime minister due to the weakness of opponents and an element of luck, it appears there are other reasons for the eleven years she spent in office. For example, the use of skilful policy and perhaps the most important, the Falklands factor. This essay will examine these issues and eventually conclude that although the above factors of weak opponent, and luck were important to Thatcher?s survival; they were certainly not the only reasons which should be taken into account. ...read more.

Whole sections of Labours traditional political support leaked away. Between 1979 and 1992 the party lost four elections in a row, its strong links with the unions were seen by voters as contributory factors to the industrial strife, and to Labours inability to govern. In many respects Labour was its own worst enemy in the period. It presented an image of a divided party more concerened with its own internal wrangles than with preparing itself for government. It is true to say that the Labour party were unable to mount an effective challenge to Thatcher. Problems were made worse, when the split between the right and the left of the part were deepened. Callaghan had been a moderate leader but he was followed by Michael foot in 1980 and he was a man of strong socialist opinion and these opinions were what caused the deeper rifts amongst the Labour party. Moreover, even Foot?s admirers saw him as a man best suited as the opposition of the day; they could never imagine him actually being the government of the day. Lynch states how Labour under foot would certainly have been beneficial to Thatcher remaining in power, and how he posed little threat to the leadership. ...read more.

Although initially Thatcher was angered by the formation of the SDP it appeared to eventually become a blessing in disguise, dividing the left opposition beyond repair and providing the controversy to scare off many loyalists. To conclude, it is evident that as the above view states two of the main reasons that Thatcher was able to survive as prime minister from 1979-1990 were indeed the fact that she had weak opponents and luck on her side. The deep divisions amongst the Labour part meant that they were never a real challenge to her power, and although the liberals appeared to make a small comeback they were never a serious threat to Thatcher. Similarly, it is uncertain whether Thatcher would have won the 1983 general election, at least so convincingly if it were not for her bravery in the Falklands changing public opinion dramatically. However, despite these being key reason other factors cannot be ignored; such as Thatcher?s economic revival in the early 1980?s as well as the defeat of many of her ?enemies? which lead the British public to believe she was pragmatic and reliable in her economic and social promises. Therefore, the weakness of Thatcher?s opponents and luck were certainly important factors of Thatcher?s survival as prime minister, but similarly they were not the only factors which played an important role. ...read more.