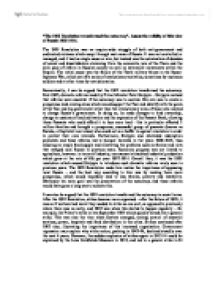 &quot;The 1905 Revolution transformed the autocracy&quot;. Assess the validity of this view of Russia 1855-1914.

"The 1905 Revolution transformed the autocracy". Assess the validity of this view of Russia 1855-1914. The 1905 Revolution was an empire-wide struggle of both anti-government and undirected violence which swept through vast areas of Russia. It was not controlled or managed, and it had no single cause or aim, but instead was the culmination of decades of unrest and dissatisfaction stemming from the autocratic rule of the Tsars and the slow pace of reform in Russian society as well as nationalist movements within the Empire. The initial cause was the failure of the Tsar's military forces in the Russo-Japanese War, which set off a series of revolutionary activities, sometimes by mutinous soldiers and at other times by revolutionaries. Economically, it can be argued that the 1905 revolution transformed the autocracy. Post-1905, dramatic reforms made by Prime Minister Peter Stolypin - Stolypin realised that reforms were essential if the autocracy was to survive. His aim was to create a prosperous land owning class which would support the Tsar and identify with the goals of the Tsar and his government rather than the revolutionary aims of those who wanted to change Russia's government. In doing so, he made changes to land ownership, change to systems of land cultivation and the expansion of the Peasant Bank, allowing those Peasants who could afford it to buy more land - this in particular affected 2 million families and brought a prosperous, successful group of peasants (known as Kulaks, a Capitalist rural class) ...read more.

The promise of an elected Duma, the right to vote for all Russian men, all new laws to be approved by the Duma, freedom of political parties, to join trade unions and have freedom of speech was a huge transformation. It was only down to the fundamental laws that stopped this being the start of a move to democracy for autocratic Russia. The October Manifesto was also a transformation to the autocracy by means of splitting the opposition - thus the Tsar managed to preserve the autocracy in the short term, but also in the hope of in the long term splitting the parties' interests from one another. Only the workers were left unappeased; they gained nothing from the Manifesto and continued to strike against the Government. At this point, the Tsar still had the support of the army, which he used to crush the final workers uprising in December of 1905 - the workers were isolated from other revolutionary groups. In the years following 1905, membership of trade unions and the most radical political parties dropped considerably - from 300,000 in 1907 to 40,000 in 1913. Again, this could easily be a sign of Government repression rather than contented workers post 1905, especially given that they did not actually benefit from the 1905 revolution and continued to strike. One final aspect of the political transformation was the slow decrease in support for the Tsar by the nobility - this would grow with the influence of Rasputin. ...read more.

The first two Dumas being deemed too radical indicated the Tsar's notion for them being an advisory body, a link to the outside world away from his family - and changes to the electoral laws allowed a far more tamed Duma in the 3rd and 4th sittings. However, this meant only1% of the population elected 300 out of 442 of the Duma members, so shows that really nothing had changed since 1905 in this aspect. It is certainly fair to say that to some extent there was not much of a transformation of the autocracy from the 1905 revolution, with aspects such as the ever-slow pace of reform bringing down the half-hearted attempts of modernisation by Nicholas II. Generally, as ever with Russia, its backwardness held it back. However, the 1905 revolution did transform the autocracy in several ways. For example, economic and social reforms started the slow process of keeping up with the times - as Stolypin said, if Russia had had 20 more years they would have been fine. Unfortunately, however, the war did not wait 20 years to arrive on Russia's doorstep. The October Manifesto was a clear indication of the pressure building up, and resultantly the Fundamental Laws and dissolving of the first two Dumas would not cause the workers' strikes to settle down. Pressure from other groups, even the declining support of the aristocracy showed that sooner or later, due to events in 1905, an even bigger transformation would occur than before. ?? ?? ?? ?? ...read more.