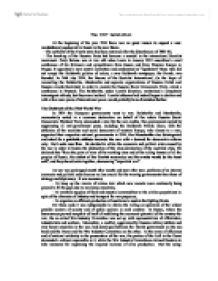 The 1917 Revolution At the beginning of the year 1914 there was no good reason to expect a new revolutionary upheaval in Russia in the near future. - The authority of the Tsarist state had been restored after the disturbances of 1905-05; - The break-up of the Russian Party had become a scandal in the international Socialist movement. Party fortune was at low ebb when Lenin in January 1912 assembled a small conference of his followers and sympathizers from Russia and from Western Europe in Prague. It appointed a new central committee and condemned as "liquidators" those who did not accept the Bolshevik policies of action; a new Bolshevik newspaper, the Pravda, was founded. In 16th July 1914, the Bureau of the Socialist International, (in the hope of reconciling the Bolsheviks, Mensheviks and separate organizations of Russian Polish and Russian Jewish Socialists) in order to reunite the Russian Social Democratic Party, called a conference in Brussels. The Bolsheviks, under Lenin's direction, maintained a completely intransigent attitude; but they were isolated. Lenin's influence had indeed begun to decline and with a few more years of international peace would probably have diminished further. The Outbreak of the First World War In 1914 the European governments went to war. Bolsheviks and Mensheviks, momentarily united in a common declaration on behalf of the whole Russian Social Democratic Workers' Party, demanded a veto for the war credits. The government replied by suppressing all anti-government press, including the Bolshevik Pravda. Soon, with the defection of the socialists and social democrats of western Europe, who almost to a man, supported their respective national governments in 1914, the Mensheviks also disintegrated and asked for a patriotic attitude towards the war with a demand for democratic reforms only. But Lenin was firm. He decided to utilize the economic and political crisis caused by the war in order to hasten the destruction of the class domination of the capitalist class. ...read more.

Lenin was determined not to cooperate in any way with the Provisional Government and not to support in any way a continuation of the war. But now that a political democracy had been achieved and that the Soviets were in effect sharing in the state power, there was a general disposition among Russian society to reach some kind of compromise with the liberals if only to form a common front against the danger of monarchist counter-revolution and to take some responsibility for carrying on the war, if only to keep the Germans out of the new democratic Russia. Against this tendency Lenin fought with all the polemical skill of which he was capable. Its outcome, as he saw it, would be to consolidate and stabilize the bourgeois republic with a reorganized army and it would be an insuperable barrier to a proletarian revolution. Lenin was determined to pursue his own ideas and on the day following his return to Russia his April Thesis was published. In June 16 - July 17, there met the All-Russian Congress of Soviets with a total of over 1000 delegates (150 were Bolsheviks). The key figures at the Congress came to be Kerensky and Lenin. Kerensky was a member of the Soviet of Petrograd as well as a leading politician in the Provisional Government. In the Congress Lenin said firmly that the Bolsheviks were ready at any moment to take over the government; though very much a minority they were ready to attempt political power and force their wishes on the majority. This led Kerensky to make a powerful attack on Lenin in the course of which he painted a clear picture of Lenin's aims: "Instead of appealing for reconstruction you clamour for destruction. Out of the fiery chaos you wish to make your will arise, like a phoenix, a dictator." The delegates were asked to vote and Kerensky carried the great majority in support of the government. ...read more.

The Bolsheviks called for land to be taken from the landowners and given to the peasants. "Peasants of Magura village...influenced by propaganda, began to divide among them-selves the land and pastures of the neighbouring estates." The workers too were restless. Transport had broken down and food was not reaching the cities. Shortage of essential raw materials caused workless days. Shortages of fuel resulted in a lack of heating in the workshops. To the discontented men in the ironworks and factories, the Bolsheviks preached workers' control of industry. It was against this background of rising discontent that Alexander Kerensky faced the new threat of the Bolsheviks. In new elections then Bolsheviks gained a majority in the Petrograd Soviet, which was henceforth be used to endorse their actions. At a meeting of the Bolshevik Party Central Committee on 23rd October, it was decided that "an armed rising is inevitable and the time is perfectly ripe." Lenin did not get his way at this meeting without a struggle. Both Zinoviev and Kamenev opposed the proposal to stake the fortunes of the Party on an immediate seizure of power. Lenin, however, was supported by Trotsky, who after having long pursued an independent political course between the Bolsheviks and the Mensheviks: had at last joined the former and had been elected to their Central Committee. While Lenin remained in hiding Trotsky took charge of the preparations for the coupdetat. A Military Revolution Committee was set up in the name of the Petrograd Soviet and assumed control of the troops in the city. On 7th November the Winter Palace was captured after brief fighting and most of the Ministers were arrested. Kerensky escaped and the officers, bitterly reproached him for his treatment of Kornilov, did not support him; he finally fled abroad. When the Second Congress of Soviets met it was presented with a new government of Russia, styled a Council of Peoples' Commissars with Lenin as Chairman. The Bolsheviks were now in power. Their fait accompli was endorsed by the Congress of Soviets which provided the new government a revolutionary legitimacy as representative of the Russian proletariat. ?? ...read more.