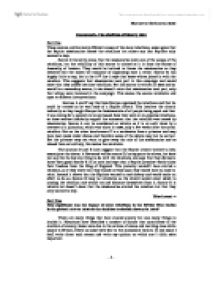 The abolition of slavery 1833.

Coursework- The abolition of Slavery 1833 Part One These sources outline many different causes of the slave rebellions, some agree that the Baptist missionaries caused the rebellions but others say that Baptists only wanted to help. Source C blatantly states that the missionaries were one of the causes of the rebellions, but the reliability of this source is tainted as it is from the House of Assembly of Jamaica. They would be inclined to blame the missionaries as they believed that the slaves we incapable of organising such a revolt. Source B, has largely little to say, but in the 11th line it says that some whites joined in with the rebellion. This suggests that missionaries took part in this campaign and would show that they caused the slave rebellions. But this source is written in 1998 and so would be a secondary source, it also doesn't state that missionaries took part, only that whites were involved in the campaign. This makes the source unreliable and open to different interpretations. Sources A and F say that Sam Sharpe organised the rebellions and that he could be trusted as he was head of a Baptist church. ...read more.

Wilberforce also had an ally, Thomas Clarkson, who collected information about the conditions on ships, which Wilberforce then took to court as more evidence of sinful behavior to white people. All Wilberforce 's work paid off because the slave trade was later abolished in 1807. Another humanitarian part of the campaign was a slogan; 'Am I not a man or a brother 'created by Josiah Wedgwood, this saying helped abolish slavery because it made people realise that slaves are human beings and are men or brothers not cargo. He also joined with Thomas Clarkson and Granville Sharp to form the society for the abolition of the slave trade. I believe also that the feminist campaign was also a necessary factor and short term cause even though they played a small part in the campaign; they still affected the abolition of slavery as women had a role in this protesting. They helped in many ways as they organised petitions in towns and cities; the three largest petitions were organised by women and they influenced thousands of people in their own homes to not buy products made in the West Indies. ...read more.

William supports this idea and that the government abolished slavery as it was in their interest, as there was less profit and there was an economic decline. These were what I think the most important factors on the decision to abolish slavery in 1834, I believe that the slave rebellions had a significant part on the decision to abolish slavery but they were not the most important factor, I believe the rebellion were a catalyst as it made the attacks against anti-slavery intensify as it made people see that slaves wanted their freedom too as the other people in the world but the rebellions may not have occurred without the help of the missionaries, spreading news around and raising the hopes of slaves. The most important factor I think was the humanitarian campaign; the middle class whites like Wilberforce where very highly respected people and were the sort not to be ignored at parliament. I think especially Wilberforce because him being an MP meant that parliament would listen to what he had to say which they would not do with a working class white for example. Word count = 1,535 Montserrat Shelbourne- 2953 - 1 - ...read more.