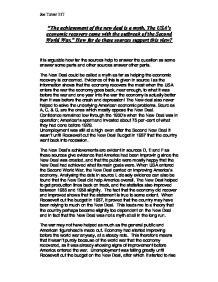 &quot;The achievement of the new deal is a myth. The USA's economic recovery came with the outbreak of the Second World War.&quot; How far do these sources support this view?

"The achievement of the new deal is a myth. The USA's economic recovery came with the outbreak of the Second World War." How far do these sources support this view? It is arguable how far the sources help to answer the question as some answer some parts and other sources answer other parts. The New Deal could be called a myth as far as helping the economic recovery is concerned. Evidence of this is given in source I as the information shows that the economy recovers the most when the USA enters the war the economy goes back, near enough, to what it was before the war and one year into the war the economy is actually better than it was before the crash and depression! The New deal also never helped to solve the underlying American economic problems. Sources A, C, & G, are the ones which mostly oppose the New Deal. Confidence remained low through the 1930's when the New Deal was in operation; American's spent and invested about 75 per-cent of what they had done before 1929. ...read more.

This leads me to a theory that the country perhaps became slightly too dependent on the New Deal and in fact that the New Deal was not a myth at all in the long run. The war may not have helped as much as the general public and American figurehead's made out. Economy had started improving before the world war anyway, at a steady rate. This therefore means that it wasn't purely because of the world war that the economy recovered, as it was already showing signs of improvement before America entered the war. Unemployment was falling greatly until Roosevelt cut the budget on the New Deal, after which it started to rise again slightly. Therefore, this does give proof that the New Deal did help the economy recover again because a year after the budget was cut, unemployment figures went up again. The war did help a great deal on improving the economy a great deal and this is shown mostly in source I as when America enters the war the unemployment decreased a lot, this is probably because of ...read more.

I conclude that it is for the above reasons that I believe that the statement, "The achievement of the new deal is a myth. The USA's economic recovery came with the outbreak of the Second World War," is not very true and is bias. The sources are useful in helping interpret this, especially source I although some sources are not as helpful as others. If I had to place their support on the view in a scale of one to ten I would place it around 4 because they do not actually support the view in general, although they do help to put forward the opposite argument. The figures and data given before the America entered war give evidence which proves that the New Deal did reduce the unemployment rate, and entering the war just sped up the process and created many more jobs therefore chopping unemployment. Although the war may have helped to speed up the economic recovery, it is unfair to state that the New Deal was entirely a 'myth' as it clearly did help America and the unemployment problems created within the country as a whole. Joe Turner 11T ...read more.