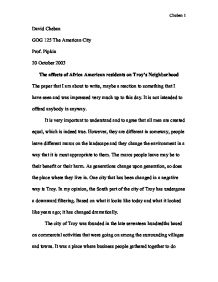 The affects of Africa American residents on Troy's Neighborhood.

David Cheban GOG 125 The American City Prof. Pipkin 20 October 2003 The affects of Africa American residents on Troy's Neighborhood The paper that I am about to write, maybe a reaction to something that I have seen and was impressed very much up to this day. It is not intended to offend anybody in anyway. It is very important to understand and to agree that all men are created equal, which is indeed true. However, they are different in someway, people leave different marcs on the landscape and they change the environment in a way that it is most appropriate to them. The marcs people leave may be to their benefit or their harm. ...read more.

It was a place where business people gathered together to do business. As time went by more and more people were coming and settling forming a community. It was not very important place. However one thing that marcs its fame is the fact that it is the hometown of Uncle Sam. Nowadays its community consists mainly of African American people. During the African American migration to the North, a great portion of them settled in the city of troy thus increasing its percentage of people of the color. As a result the white residents began spreading out of the center, towards the North and today, there is North and South Troy with many small villages like: Wynantskill, Lansinburg and many others. ...read more.

Also, the same impression one can get from observing the streets, which are not very well maintained or not at all in some parts. There are not very many places to go for entertainment, which makes it more boring and not interesting. I familiar with it not because I am a Geographer, but because working as delivery personnel in a furniture store, very often I had to drive through or even go into the houses to drop off the furniture and it was not a very pleasant place to be in. Often time I think to myself that these neighborhoods are still in the period of social disorder of the city. I would not recommend anybody such a place to live in. Cheban 1 ...read more.