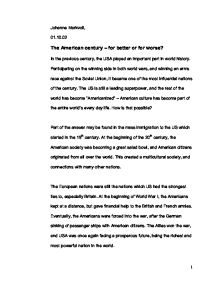 The American century - for better or for worse?

Johanne Markvoll, 01.10.02 The American century - for better or for worse? In the previous century, the USA played an important part in world history. Participating on the winning side in both world wars, and winning an arms race against the Soviet Union, it became one of the most influential nations of the century. The US is still a leading superpower, and the rest of the world has become "Americanized" - American culture has become part of the entire world's every day life. How is that possible? Part of the answer may be found in the mass immigration to the US which started in the 19th century. ...read more.

The Allies won the war, and USA was once again facing a prosperous future, being the richest and most powerful nation in the world. World War I wasn't the only war the Americans got involved in. Also in World War II and the Vietnam War, American soldiers participated. Some of these soldiers spent many years abroad, and in some way or another, they left an imprint of the American culture behind when they went back to the land of the free. The arrival of television had a great impact on the whole world. News from the other side of the world could flash into television-screens in every corner of the world. ...read more.

During he century, great business companies like the Coca Cola Company and Levi's had grown. Their products were exported to every corner of the world, and with time, the hamburger and the Barbie doll had joined them. American lifestyle was to be found all over the world. What are the affects of this Americanization, one might ask. Well, I won't deny that it may have strengthened the global society (as well as the American economy...), by giving people from all over the world something in common. In our modern society, you can't easily spot a Norwegian among thousands of Americans, nor the other way. On the other hand, this might also be a threat to a nation's individuality - the great mixture of cultures leaves little space for the growth of a nation's own cultural heritage. 1 ...read more.