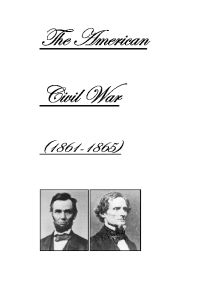 The American Civil War (1861-1865) The American Civil War was a military conflict between the North, which was known as the Union, and the South, known as the Confederate State of America. The war costed 600, 000 lives and property worth more than $5 billion. There were a complex series of events and reasons including economic and social factors, political factors and the different views of slavery, which differentiated the two regions of America and led the country into the most significant military battle of the nation's history. The main debate between the Union and the Confederacy, which resulted into one of the most destructive events of American history, was whether slavery should be allowed or prohibited. Slavery, which had been a part of the Southern way of life for well over 200 years, was a substantial part of the Southern society because the people wanted and needed slave labour in the fields in the cultivation of tobacco, rice, indigo most importantly, cotton. Farming was the Confederacy's main industry and cotton was the primary farming product. Many slaves were also used to provide labour for the various household chores that were needed to be done. ...read more.

20,600 (=15%) Workers in industry 1,198,000 (=92%) 111,000 (=8%) Literacy (1860) 94% 58% of the total population, 83% of the free population and 10% of the slave population Population 22,340,000 (=63%) 9,103,000 (=37%) (incl. 3,954,000 slaves) The following source explains the marginal difference in economy of the two regions. It particularly shows the North's advance in industrialization. As Northern and Southern patterns of living diverged, their political ideas also developed marked differences. Firstly, the political goals of the Union and the Confederacy were completely different. The Union's goals were free public education, better salaries and working conditions for workers, rights for women, and better treatment for criminals. However, the South felt these views were insignificant. Many Southerners felt that a government dominated by free states could endanger existing slaveholdings. So their aim was to have less government control and spread slavery to the new territories, so that new slave states could be created and the South's political influence would remain strong, as creating new slave states would result in more southern representation in the congress. But the North also wanted more representatives in the congress too. Because of the disagreement, the Confederate States were more determined to start a new nation by electing its own president, Thomas Jefferson. ...read more.