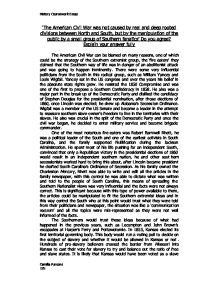 The American Civil War was not caused by real and deep rooted divisions between North and South, but by the manipulation of the public by a small group of Southern fanatics' Do you agree? Explain your answer

'The American Civil War was not caused by real and deep rooted divisions between North and South, but by the manipulation of the public by a small group of Southern fanatics' Do you agree? Explain your answer fully The American Civil War can be blamed on many reasons, one of which could be the strategy of the Southern extremist group, the 'fire eaters' they claimed that the Southern way of life was in danger of an abolitionist attack and was going to happen imminently. There were some very influential politicians from the South in this radical group, such as William Yancey and Louis Wigfall. Yancey sat in the US congress and over the years his belief in the absolute state rights grew. He resisted the 1850 Compromise and was one of the first to propose a Southern Confederacy in 1858. He also was a major part in the break up of the Democratic Party and disliked the candidacy of Stephen Douglas for the presidential nomination, after those elections of 1860, once Lincoln was elected; he drew up Alabama's Secession Ordinance. Wigfall was a member of the US Senate and became a leader in the attempt to reassure southern slave-owner's freedom to live in the territories with their slaves. ...read more.

Lots of short term events that ended up increasing intensity which resulted in the fire-eaters pushing for secession, this push for secession produced the problems with Fort Sumter, and then caused the first shots of the American Civil War to become. However, on the other hand can the American Civil War be blamed all on a group of Southern fanatics, there was a lot of real and deep rooted division between the Northern Republican Party and the Southern pro-slavery followers, such as economic and social factors, political factors, the fight over slavery and the Kansas-Nebraska Act. By the start of the American Civil War, the North and the South had developed into two very different expanses. Different social, economic and political views slowly pushed the two sections further and further apart. Even though compromises had kept the Union together for many years, in 1860 the situation was volatile, Abraham Lincoln was voted president and this was viewed by the South as a danger to slavery and this provoked the war. During the early 18th Century, economic differences between the regions also increased, by 1860, cotton was the widely-produced crop and represented 57% of US exports. The productivity of cotton concluded the South's reliance on the plantation system and its vital element, slavery. ...read more.

As the Southern states seceded they seized and occupied most of the federal forts within their borders or off their shores, only four remained in the hands of the union. Fort Sumter stood guard in the mouth of the harbour of Charleston, South Carolina. The troops within Fort Sumter were running out of supplies so when supplies were taken by an unarmed merchant vessel, the Confederacy fired at them, one of the first shots of the American Civil War. The American Civil War, I think, largely comes down to the sectional problems throughout the years, however, I do believe that the southern fanatics, the fire-eaters played a part in the fall down in communication between the North and South which could have possibly prevented the American Civil War. However, not all can be blamed on the South; the North did play a part in the problems, with extremists such as John Brown and his incidents. However, I think it was the combination of the long-term causes, such as the difference in opinion about slavery, and the problems from both the North and South problems caused the civil war. History Coursework Essay Camilla Parsons 12S ...read more.