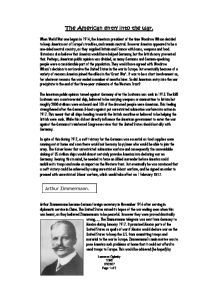 The American entry into the Great war.

The American entry into the war. When World War one began in 1914, the American president of the time Woodrow Wilson decided to keep America out of Europe's troubles, and remain neutral. However America appeared to be a one-sided neutral country, as they supplied Britain and France with loans, weapons and food. Historians also believe that America would have helped Germany, but the British navy prevented that. Perhaps, American public opinion was divided, as many Germans and German-speaking people were a considerable part of the population. They would have agreed with Woodrow Wilson's decision to not involve the United States in the war in Europe. But eventually because of a variety of reasons America joined the allies in the 'Great War'. It was to be a short involvement as, for whatever reasons the war ended a number of months later. So did American entry into the war precipitate to the end of the three-year stalemate of the Western Front? The American public opinion turned against Germany after the Lusitania was sunk in 1915. ...read more.

However they were proved drastically wrong... The Zimmermann telegram was sent from Germany to Mexico during January 1917. It promised Mexico parts of the United States as spoils of war if Mexico would declare war on the United States to keep the U.S. from committing troops and material to the war in Europe. Zimmermann's main motive was to pose America such problems at home that it could not afford to send troops to Europe. This would be achieved (he hoped) by Germany posing a threat to America's east coast, while Japan attacked from the west and Mexico invaded from the south. The telegram had been encrypted (put into a code which made it nonsense). However British cryptologists in Admiralty 'Room 15' decrypted the telegram and alerted the American president on the 24th February. This was a large blow to Germany when they found out that telegram had been revealed by (they believed) someone in the Mexican telegraph office, as MI5 had one of their agents 'H' retrieve the telegram from there and that version ...read more.

When eventually America did join the war Wilson said that he made the decision "with the keenest regret" so even after the Zimmermann telegraph had been received, America still wanted to abstain from being involved in the 'Great War'. The sinking of the Lusitania, unrestricted submarine warfare, Zimmermann's telegraph, all these must have been going through Woodrow Wilson's mind when he said those words, taking the United States into the war. However as mentioned above, American troops didn't arrive until May 1918 and the war ended in November. That is only 5 months of action, although losses of American troops were still quite high, but it could be debated whether they did actually have an effect on the war or not. On one hand, you have a rather large number of losses, and the fact that the German campaign almost succeeded but the advance was halted around the same time that the Americans began to arrive, while on the other side the Luddendorf offensive was the Germans last gap effort as the Americans were about to arrive. Laurence Oglesby 10M5 07/05/07 Page 1 of 2 ...read more.