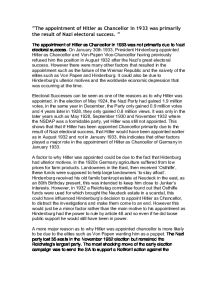 The appointment of Hitler as Chancellor in 1933 was primarily the result of Nazi electoral success.

"The appointment of Hitler as Chancellor in 1933 was primarily the result of Nazi electoral success. " The appointment of Hitler as Chancellor in 1933 was not primarily due to Nazi electoral success. On January 30th 1933, President Hindenburg appointed Hitler as Chancellor and Von-Papen Vice-Chancellor having previously refused him the position in August 1932 after the Nazi's great electoral success. However there were many other factors that resulted in the appointment such as the failure of the Weimar Republic and the naivety of the elites such as Von Papen and Hindenburg. It could also be due to Hindenburg's ulterior motives and the worldwide economic depression that was occurring at the time. Electoral Successes can be seen as one of the reasons as to why Hitler was appointed. In the election of May 1924, the Nazi Party had gained 1.9 million votes, in the same year in December, the Party only gained 0.9 million votes and 4 years later in 1928, they only gained 0.8 million views. ...read more.

However, in 1932 a Reichstag committee found out that Osthilfe funds were used for which brought the Neudeck estate in a scandal, this could have influenced Hindenburg's decision to appoint Hitler as Chancellor, to distract the investigations and make them come to an end. However this would just be a minor factor rather than the main motive to his appointment as Hindenburg had the power to rule by article 48 and so even if he did loose public support he would still have been in power. A more major reason as to why Hitler was appointed chancellor is more likely to be due to the elites such as Von Papen wanting him as a puppet. The Nazi party lost 35 seats in the November 1932 election but remained the Reichstag's largest party. The most shocking move of the early election campaign was to send the SA to support a Rotfront action against the transport agency and in support of a strike. ...read more.

The fact that Hitler was only allowed three Nazi's in the cabinet shows although they only wanted Hitler there as a puppet to do as he was told, the elites must have still seen the Nazi party as a threat. However without Von Papen and Hindenburg's motive, Hitler would probably have never gotten into power and so due to Hitlers popularity and the elites choices, this is why Hitler was appointed Chancellor in 1933. In conclusion, electoral success is only a partial reason for Hitler being appointed chancellor in 1933, if it was purely down to electoral successes then he would have been put into the position earlier. In fact the main reason was down to Hindenburg and Von Papen's plans that he finally made it to being Chancellor as his mass support was appealing to them. However saying this, without electoral success and mass support, Hitler would have never been considered for the Chancellor position in the first place. ...read more.