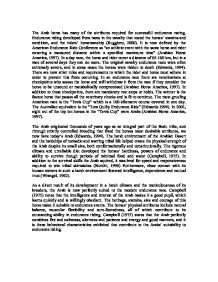 The Arab horse has many of the attributes required for successful endurance racing. Endurance riding developed from races in the cavalry that tested the horses' stamina and condition, and the riders' horsemanship (Ruggiero, 2000). It is now defined by the American Endurance Ride Conference as "an athletic event with the same horse and rider covering a measured distance within a specified maximum time" (Arabian Horse America, 1997). In a day race, the horse and rider cover a distance of 65-160 km, but in a race of several days they can do more. The original cavalry endurance tests were often extremely severe, and in some cases the horses were ridden to death (Edwards, 1994). ...read more.

The winner is the fastest horse that passes all the veterinary checks and is fit to continue. The most grueling American race is the "Tevis Cup" which is a 160-kilometre course covered in one day. The Australian equivalent is the "Tom Quilty Endurance Ride" (Edwards 1994). In 2001, eight out of the top ten horses in the "Tevis Cup" were Arabs (Arabian Horse America, 1997). The Arab originated thousands of years ago as an integral part of the Bedu tribe, and through strictly controlled breeding that fixed the horses most desirable attributes, we now have today's Arab (Edwards, 1994). ...read more.

As a direct result of its development in a harsh climate and the meticulousness of its breeders, the Arab is now perfectly suited to the modern endurance race. Campbell (1975) notes that the intelligence and interest of the Arab makes it a good pupil, which learns quickly and is willingly obedient. The heritage, stamina, size and courage of this horse make it suitable to endurance events. The horses' physical attributes include natural balance, muscular flexibility and sure-footedness, all of which contribute to its outstanding ability in endurance riding. Campbell (1975) states that the Arab perfectly combines fire and calmness, alertness and patience and energy and good manners, and it is these behavioral characteristics exhibited that contribute to the Arabs' suitability to endurance riding. ...read more.