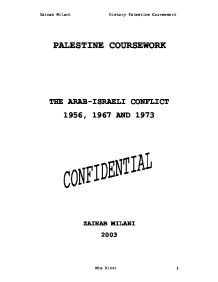 PALESTINE COURSEWORK THE ARAB-ISRAELI CONFLICT 1956, 1967 AND 1973 ZAINAB MILANI 2003 Arab/Israeli Conflict 1956, 1967 and 1973 saw three wars between the Arabs and Israelis. Below are a few factors that helped cause the war: * Nasser's personality * Oil * USA foreign policy * USSR foreign policy * Suez Crisis * Arab nationalism a) Choose one factor and explain how it helped to cause the war. (4 marks) b) Choose one factor which you think was the most important in causing the war. (9 marks) c) Why were the Israelis able to win all their wars? (12 marks) a) Choose one factor and explain how it helped to cause the war. (4 marks) There were many factors which contributed to the wars between the Arabs and Israelis in 1956, 1967 and 1973. One of which was President Nasser's personality. In the 1950's a new president, Gamal Abdul Nasser, came to power in Egypt. President Nasser had a very strong and determined character and was very eager to get revenge on the Israelis for the 1948 war, which Egypt lost. President Nasser wanted to get Palestine back into the Arab control and to do this he had to unite the Arab world under his control. In order to get what he wanted Nasser needed money and arms. Czechoslovakia was giving aid in the form of money and weaponry to the Egyptians. The reason they did this was because they were being told to do so by the USSR, who at this time were in the middle of the 'cold war' with the USA. USSR was hoping to get influence in the Middle East by doing so, and to improve its position in the 'cold war'. Egypt had control over the Suez Canal, which was used by British and French ships as a military base, it was also their way of getting into and out of the red sea. ...read more.

It was more a more a result of the wars than an actual cause thus, I don't consider the 'oil weapon' to be as important as the Russian foreign policy. The USA had always been the main ally of Israel and its foreign policy contributed to the tension between the Arabs and Israelis. The USA gave Israel $65 million to improve the country and although it had a great influence on the build-up of Israel it is not as important as the Russian foreign policy as it wasn't militarily but rather only politically involved in the 1956 and the 1967 wars where it refused to support the invasion and called for immediate ceasefire and did not offer any military help. However, in the 1973 war, it contributed just as much, if not more than Russia and supplied Israel with the latest weapons to fight the Arabs. Because of the lack of military support compared to the Russian foreign policy in the first two wars, I don't think it was as important. In conclusion, after looking at all the factors that caused the 3 wars and comparing them with each other, I personally believe that the strongest factor which caused the 3 wars was the Russian foreign policy because it was the only factor that was involved in and contributed to all 3 wars. c) Why were the Israelis able to win all their wars? (12 marks) From 1956 to 1973, three wars took place between the Arabs and Israelis in which the Israelis won all of them, even though the Arabs seemed to have a better chance at winning than the Israelis. Looking back at the way each of the three wars was fought and how each country responded to the others actions, we can see that there were a lot of mistakes made, especially by the Arabs. In 1956, during the Suez-Sinai war, it is obvious that the main reason as to why Israel won was because their allies were much more in numbers and strength. ...read more.

So, why were the Israelis able to in fact win all these three wars? Was it due to the fact that they had much better military forces and stronger military strength than the Arabs? Was it because they were backed by the world's superpowers during all three wars? Or was it in fact because the Arab's were simply less tactful and clever than the Israelis? Since, the Israeli troops were highly trained men who had spent years learning the skills and tactics of real fighters, than they were obviously more likely to win when compared to the Arab fighters who were mainly used to guerrilla attacks. Both the Israelis and the Arabs wouldn't have fought to such a level if they weren't back up and supported by the 'super powers' the USA and USSR which both had a lot of influence over the two. The Yom Kippur war proved how close the two 'super-powers' were involved, not to help Israel and the Arabs but it was more like a personal conflict between themselves using Israel and the Arabs as their alibis. Therefore, all the plans the Arabs had to win the wars were useless because it comes to the basic fact that Israel was backed up with the world's most three powerful countries: America, Britain and France, whereas the Arabs were only backed up with Russia. How could the Arabs possibly win all their wars? Almost as an important factor as the latter, was the tactics employed by the Israelis; surprise attacking the Arabs in the first two wars, and using flaws in Arabs' tactics to their advantage in the third war. However, it can also be said that the Israelis were able to win their wars because the Arabs just weren't smart enough to take actions when given messages beforehand (in the 1967 war) about attacks, and thus, it led to them being to be taken by surprise and consequently led to them losing all three wars. Zainab Milani History Palestine Coursework 1 Mrs Rizvi ...read more.