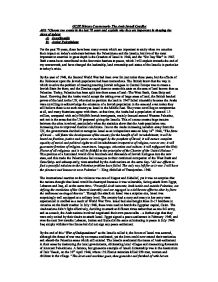 GCSE History Coursework- The Arab Israeli Conflict A02: "Choose two events in the last 70 years and explain why they are important in shaping the views of todays A) Jews/Israelis B) Arabs/ Palestinians For the past 70 years, there have been many events which are important to study when we consider their impact on today's stalemate between the Palestinians and the Israelis, but two of the most important to examine in great depth is the Creation of Israel in 1948, and the "Six Day War" in 1967. Both events have contributed to the four main barriers to peace, which I will explain towards the end of my coursework, and have changed the leadership, land ownership and status of the Israelis in particular to today's crisis. By the year of 1948, the Second World War had been over for just under three years, but the effects of the Holocaust upon the Jewish population had been tremendous. The British knew that the way in which to solve the problem of creating roaming Jewish refugees in Central Europe was to create a Jewish State for them, and the Zionists urged them to create this state on the area of land known then as Palestine. Today, Palestine has been split into three areas of land- The West Bank, Gaza Strip and Israel. Knowing that the Arabs would accept the taking over of large areas of land, the British handed power of the land to the UN, who tried to partition the land in 1947 failed miserably because the Arabs were unwilling to acknowledge the existence of a Jewish population in the area and even today they still believe there is no such country as Israel in the Middle East. ...read more.

Israel still exists as a state, for the Jews it offers a homeland free from tyranny, and a safe place where they can practice their culture in the land that belongs to them completely, as it was promised to them by god. Creating the state would encourage more antagonism amongst the Arab populations, giving them a physical heartland to attack - internationally recognised by the UN, but not recognised by the Arab nations- it now causes many Palestinians to become terrorists to defeat the threat to their country "Kill the Jews wherever you find them, this is pleasing to Allah" . The Transjordan Prime Minister once wrote in a letter to the United Nations- "Our position is clear, and has been proclaimed on every occasion. It is never to allow the creation of a Jewish State in Palestine and to exclude partition. And our object is to cooperate with the other Arab States in her deliverance. Once this aim is attained, the determination of her future status is the right and concern of her own people. Theirs alone is the last word. We have no other object or aim in view". The Muslim view is that Israel is a Naqbah (catastrophe), an affront to their religious faith. As such, Israel must be resisted by all available means and eradicated as soon as possible. This view is the basis for not only the events of 1947-1948, but continues to drive Middle East events to this day. One result of the Arab attacks on the State of Israel and its Jewish population was the flight of Arabs from their homes in Israel. ...read more.

Permanent settlements have been put up in areas of Jordan and Lebanon, and have become targets of terrorism for the Jewish extremist groups, but there has been much sympathy for the Arab refugees from the international community, and continue to maintain that the occupation of the West Bank and Gaza Strip is illegal and should be given back to the Palestinians. However this wouldn't solve any of the extremist problems within the groups, as 100% of the land is not under their control. In addition to this, Jerusalem is finally fully controlled by the Israelis, who can now practice their religion and cultures openly, but continue to allow the Muslims to worship their own prophets without fear or prejudice. There has been much controversy over who will own Jerusalem in the future, but it is fair to say that the Jews care more for the city and its inhabitants, while Muslims would worship more in the Saudi Arabian cities of Mecca and Medina. Overall, it is important to realise the full effect of the Jewish take- over of Palestine. Within 40 years they have created their own state, and extended their lands to fully occupy Palestine, which they do to this day. The Palestinians have been driven from their homes, taunted and been humiliated through military engagement. Although they can still choose to live in the West Bank, it no longer belongs to them. The hatred of the Jews has increased dramatically over the years, and with this, the Arab tactics have changed from warfare to terrorism in a bid to anger the enemy. Therefore this is perhaps why there is so much tension today, even if the Peace deal was to succeed it would never solve the ultimate problem- shared ownership of Palestine. ...read more.