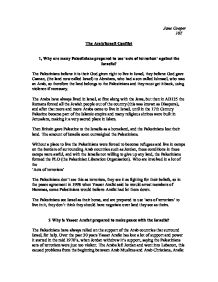 The Arab/Israeli Conflict - Why are many Palestinians prepared to use 'acts of terrorism' against the Israelis?

Jane Cooper 10T The Arab/Israeli Conflict 1, Why are many Palestinians prepared to use 'acts of terrorism' against the Israelis? The Palestinians believe it is their God given right to live in Israel, they believe God gave Caanan, (the land now called Israel) to Abraham, who had a son called Ishmael, who was an Arab, so therefore the land belongs to the Palestinians and they must get it back, using violence if necessary. The Arabs have always lived in Israel, at first along with the Jews, but then in AD135 the Romans forced all the Jewish people out of the country (this was known as Diaspora), and after that more and more Arabs came to live in Israel, until in the 17th Century Palestine became part of the Islamic empire and many religious shrines were built in Jerusalem, making it a very sacred place in Islam. Then Britain gave Palestine to the Israelis as a homeland, and the Palestinians lost their land. The amount of Israelis soon outweighed the Palestinians. Without a place to live the Palestinians were forced to become refugees and live in camps on the borders of surrounding Arab countries such as Jordan, these conditions in these camps were awful, and with the Israelis not willing to give up any land, the Palestinians formed the PLO (the Palestinian Liberation Organisation). ...read more.

demanded the release of Israeli prisoners, but then he made a speech saying he recognised Israel as a country, and he disapproved of terrorism of any type. This speech brought him and Yitzhak Rabin (the Israeli Prime Minister of the time) closer until in 1993 they both sighed a peace agreement, in which Arafat received a safe passage between Gaza and the West Bank and an airport and seaport in Gaza. The Israelis also withdrew 13% of their troops from the West Bank and released 750 Palestinian prisoners, Arafat had gained more with negotiation than he ever had using terrorism. 3, Why do many Israelis think that they have the right to control the West Bank, the Gaza Strip and Jerusalem? The Jews like the Palestinians believe God gave them Caanan through Isaac (Abraham's Israeli son) they believe that Israel is their Promised Land, and settled there in 1200BC. They were also promised the land after the World Wars so they strongly believe this land is theirs. In 1967 the Six-Day War took place, although they didn't start this war, the Israelis won, despite being outnumbered 3-1, the Israeli army captured, the Golan Heights from Syria, the west of the River Jordan from Jordan and the Sinai Peninsula from Egypt. ...read more.

Since he was elected, President Bush has already tried to ask the two sides to make peace, but was ignored as neither side is willing to back down, (The Times, 31/03/01*) The Middle East is also very important place for of oil supplies it holds approximately 56% of the worlds oil supplies (in 1977 it had fifty thousand million tonnes of oil reserves) so if the Arabs and the Israelis went to war, some of the major oil supplies of the world would be cut off, making fuel and electricity prices go up. It is therefore in everybody's interests to bring about peace. After the first world war, Britain promised the Jews a homeland, at what was called the Balfour declaration: "the establishment in Palestine of a national home for the Jewish people..." and so now Britain feels peace is important to give the Israelis the land that is promised to them. Then after the Second World War and the holocaust, (where 6,000,000 Jews were murdered,) World sympathy grew in favour of the Jews, many people believe they should be allowed to live in peace. A lot of Christians want peace in Israel because Jesus was born there, and they believe he will not return if things stay as they are. * Check the newspapers in folder ...read more.