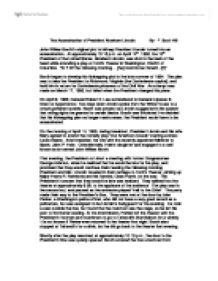 The Assassination of President Abraham Lincoln

The Assassination of President Abraham Lincoln By: F. Scott Hill John Wilkes Booth's original plot to kidnap President Lincoln turned into an assassination. At approximately 10:15 p.m. on April 14th, 1865, the 16th President of the United States, Abraham Lincoln, was shot in the back of the head while attending a play at Ford's Theater in Washington, District of Columbia. "At 7:22 the following morning... [he] took his last breath. (2)" Booth began to develop his kidnapping plot in the late summer of 1864. The plan was to take the President to Richmond, Virginia (the Confederate capital), and hold him in return for Confederate prisoners of the Civil War. An attempt was made on March 17, 1865, but failed when the President changed his plans. On April 9, 1865, General Robert E. Lee surrendered to General Ulysses S. Grant at Appomattox. Two days later Lincoln spoke from the White House to a crowd gathered outside. Booth was present as Lincoln suggested in his speech that voting rights be granted to certain blacks. ...read more.

They were met at the door by John Parker, a Washington police officer, who did not have a very good record as a policeman, but was assigned to be Lincoln's bodyguard for the evening. He took a seat outside the box, but found that he could not see the stage, so he left his post to find better seating. At the intermission, Parker left the theater with the President's footman and coachman to go to Taltavull's Star Saloon for a whisky. It is not known if Parker ever returned to the theater that night. Booth also stopped at Taltavull's for a drink, but he did go back to the theater that evening. Shortly after the play resumed, at approximately 10:15 p.m., the door to the President's Box was quietly opened. Booth entered the box unnoticed from behind the President, who was intently watching the play with his wife and their two guests. Booth pulled out his derringer and shot President Lincoln in the back of the head at point-blank range. ...read more.

When he removed his finger, "an oozing of blood followed and he commenced to show signs of improvement (3)." He determined that a stagecoach ride to the White House would kill the President, so he had him carried across the street to the Peterson Boarding House. The wound was kept open to keep the brain from swelling from the bleeding, and the President's head was supported to allow the blood to run out. At 7:22:10 the following morning, President Lincoln became the first president to be assassinated, when he died in the same bed that John Wilkes Booth had rested on the previous month. Booth hated the President who represented all of the things that Booth was against. He blamed Lincoln for all of the South's problems, and thought that killing him would lead to a comeback for the South. Booth was eventually trapped and killed in a barn near Port Royal, Virginia. All of his co-conspirators would be caught and sentenced to either life in prison or death by hanging, except one whose only part was helping Booth to escape from Ford's Theater. He was sentenced to 6 years. 1. http://home.att.net/~rjnorton/Lincoln75.html 2. http://www.angelfire.com/my/abrahamlincoln/Assassination.html 3. http://www.chicagohs.org/wetwithblood/RETURN/ford1.htm ...read more.