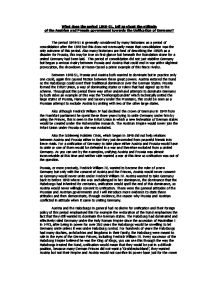 What does the period 1848-51, tell us about the attitude of the Austrian and Prussia government towards the Unification of Germany? The period 1848-51 is generally considered by many historians as a period of consolidation after the 1848 but this does not necessarily mean that consolidation was the only outcome of this period. Also many historians are fond of describing the 1850's as a disaster for Prussia, this may be true on first glance but beneath the foundation stone for a united Germany had been laid. This period of consolidation did not just stabilize Germany but began a serious rivalry between Prussia and Austria that could end in war at the slightest provocation, the showdown at Hesse-Cassel a prime example of this fierce rivalry. Between 1848-51, Prussia and Austria both wanted to dominate but in practice only one could, again this caused friction between these great powers. Austria restored the Bund so the Habsburgs could exert their traditional dominance over the German States. Prussia formed the Erfurt Union, a way of dominating states or rulers that had signed up to the scheme. Throughout this period there way other underhand attempts to dominate Germany by both sides an example of this was the 'Dreikonigsbundnis' which technically united the large states of Prussia, Hanover and Saxony under the Prussians, this could be seen as a Prussian attempt to exclude Austria by uniting with two of the other large states. Also although Fredrick William IV had declined the crown of Germany in 1849 from the Frankfurt parliament he spent these three years trying to unite Germany under him by using the Princes, this is seen in the Erfurt Union in which a new federation of German states would be created under the Hohenzollen monarch. ...read more.

Prussia had an attitude of unify Germany through the Princes and pronounce Fredrick William IV 'Kaiser', this was their attitude but it wasn't necessarily a practical plan. The first example of Prussia's pro-unification attitude is seen by the proposal of General von Radowitz. Interestingly, Radowitz was a nationalist but also a friend of Fredrick William IV. It could be said that much of Fredrick William IV's idea to unite Germany through Princes stems from advice given by Radowitz. In 1849, Radowitz proposed the Prussian Union plan which said that their would be a second Reich that would exclude Austria, but Austria and the 2nd Reich would have a very close relationship also Austria and Prussia would be equals, and would have a strong central government headed by the Prussian monarch. This met with approval from Fredrick William IV, who wanted to rule Germany but not as a constitutional monarch, like the Frankfurt Parliament proposed. Generally, the idea of a Kleindeutschland headed by Prussia with a strong government would have been greeted with enthusiasm if it wasn't for the influence and power of the Habsburg Empire. If Habsburg influence and power had been obviously in decline then I think Germany could have been unified in 1849 under Fredrick William IV, but because of conservative Austria, it had no chance of succeeding, the Union Plan tried to form a Germany with Kleindeutschland borders but a GroBdeutschland relationship with Austria. Although, Germany did not unify in 1849, the Prussian Union Plan did show that the Prussian attitude to unification had changed, it was no longer staunchly devoted to the status quo like it had been in the Vormarz period but had began to seriously consider unification as a practical option. ...read more.

How could a leader of a unified Germany be held to account by a foreign Duke? To conclude, Austria had the same attitude from 1815 to the Seven Weeks War, she wanted to dominate the German states and wanted to always dominate like she always had. Austria was not interested in a democratic unification, she was only interested in a Habsburg controlled united Germany. It was only Prussia's attitude towards a united Germany that changed in the period 1848-51, the Prussians wanted to challenge Austria for dominance and by dominating Prussia could unite Germany under her banner. Prussia was not willing to fight for this privilege though, she hoped, naively, that Austria would grant a request for Prussia to dominate and this would never happen. I think this hope of uniting Germany with Austrian consent stems from Fredrick William IV, he was a nationalist but also a traditionalist, unfortunately these attitudes become oxymoron's for a Prussian King because he couldn't be both and he respected traditional more highly. Austria's attempt to restore the Bund demonstrates her attitude that she still wanted to dominate and the Erfurt Union shows Prussian aim of unifying Germany and Olmutz shows the limits of Prussian power. No matter how enthusiastic King Fredrick William IV was in unifying Germany he would never be able to with his traditionalist values, unification would have to take place without Fredrick William IV, the Bund and Austrian dominance over the German states. Acknowledgements The Unification of Germany 1815-90 by Stiles and Farmer Germany 1848-1914 by Whitfield ?? ?? ?? ?? ...read more.