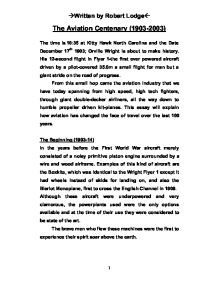 The Aviation Centenary (1903-2003) The time is 10:35 at Kitty Hawk North Carolina and the Date December 17th 1903; Orville Wright is about to make history. His 12-second flight in Flyer 1-the first ever powered aircraft driven by a pilot-covered 35.6m a small flight for man but a giant stride on the road of progress. From this small hop came the aviation industry that we have today spanning from high speed, high tech fighters, through giant double-decker airliners, all the way down to humble propeller driven kit-planes. This essay will explain how aviation has changed the face of travel over the last 100 years. The Beginning (1903-14) In the years before the First World War aircraft merely consisted of a noisy primitive piston engine surrounded by a wire and wood airframe. Examples of this kind of aircraft are the Boxkite, which was identical to the Wright Flyer 1 except it had wheels instead of skids for landing on, and also the Bleriot Monoplane, first to cross the English Channel in 1909. Although these aircraft were underpowered and very clamorous, the powerplants used were the only options available and at the time of their use they were considered to be state of the art. ...read more.

This and the Me-163 (rocket powered, but very unreliable and more likely to kill its own pilots than those of the RAF) could have changed the Luftwaffe's fortunes had they developed them earlier to increase their 12 hour endurance time. The only jet that the RAF built during the war, was the Gloster Meteor powered by two dH Halford H.I engines. Production of the Meteor ended in 1954, after 3,947 had been built. Only five of them are still flying. Modern Aviation (1945-2003) After the war ended in 1945 the world of aviation had changed for good. For example our previous allies, the Soviets, were developing their first jets with the release of the MiG-15 "Fagot" which first saw service in the Korean War. The 18000 built, made this the most built fighter. On the other side of the Atlantic the Americans were building the main rival to the "Fagot" the F-86 "Sabre". It was less powerful and heavier than the MiG-15 but better US training more than compensated this. 1950-60 -The 1950s saw the B-52 intercontinental bomber publicised. It has enormous bomb bays and 8 engines in pairs of two and has also been used for the maiden flights of the X-15 and others; also the RB-52 is used for reconnaissance missions. ...read more.

Aircraft made of these materials could become a reality anytime in the next 20 years. With the developments of UAVs (Unmanned Air Vehicles) pilots may soon not be needed in the skies, only the controller on the ground is needed. There are already UAVs in service such as the USAF's Predator, but the Boeing is in the progress of designing their own UAV called the "Bird of Prey". More conventional aircraft are also being planned such as the Airbus A380-XXX, which will be part of their battle to keep their place as the number 1 air travel company, the A380 will be double decked with the top being full of shops and recreation facilities for Business and First class, and the lower deck being devoted to Economy Class passengers. Two other aircraft are also being developed by Lockheed-Martin, the F-22 and the JSF (Joint Strike Fighter) the JSF will replace Harriers and uses a different method of vertical takeoff because it uses fans in the centre of the aircraft instead of nozzles. The F-22 will be similar but devoted mainly to being stealthy. Thus ends our journey through the centenary of powered aviation. I hope you enjoyed reading it and much as I did writing it, and I also hope that the next 100 years produces as much brilliant aircraft as this one. ...read more.