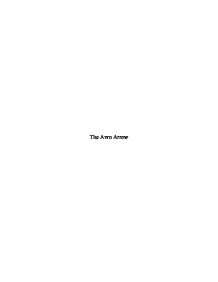 The Avro Arrow February 20th, 1959. Black Friday. The day Prime Minister John Diefenbaker announced to the House of Commons that the Arrow project was to be terminated. Many would argue that Canadian aviation died that day. Many others would argue that not only did Canadian aviation die but so did any hope of an entirely independent Canadian foreign policy. The fact that a significant portion of the Canadian aviation industry died that day cannot be disputed. Canada's aviation sector has never fully recovered from the death of the Arrow and has, in many respects, been reduced to branch plant status similar, in many ways, to other sectors of the Canadian economy. Why, then, would the government cancel a program such as this when it must surely have known that the cancellation would have a detrimental effect on the nation's foreign policy? There are no easy answers and, as will be demonstrated, it is highly unlikely that this project was cancelled due to foreign policy considerations but rather than in spite of them. Before examining the cancellation of the Arrow and Iroquois programs and their relation to foreign policy it would be prudent to first look at exactly what these programs were and why they originally came in to being. At the end of World War II Canada's armed forces were among the world's largest. The Royal Canadian Air Force was the third largest air force in the world. Although Canada's post-war governments had decided to reduce the size of the nation's military forces they still had a role to play in world affairs as was evident by Canada's small, yet significant, contribution to the United Nation's forces during the Korean War. Along with the considerable strength of its armed forces Canada, at the end of World War II, had a substantial manufacturing capability. This had been demonstrated during the war, as Canada became one of the main 2 producers of materials for the Allied war effort. ...read more.

. . was highly hazardous, and therefore all decisions to proceed with it were tentative and subject to change . . ."22 The government seemed to be convinced that the missile era which the world was then entering had made manned interceptor aircraft obsolete. Evidence for this is provided by Diefenbaker's proclamation that "Potential aggressors now seem more likely to put their effort into missile development than into increasing their bomber force."23 In the present day it is obvious that ICBM's did not, in any way, render the manned interceptor obsolete. The government of the day should have realized this as well. Although it is not possible for a politician to foresee the future this was not necessary to see that missiles would not render manned aircraft obsolete. All the Diefenbaker government had to do was look a decade into the past and they would have seen evidence that manned aircraft were able to compete, on fairly even ground, with 8 missiles. During World War II Germany had launched V1 and V2 rockets at Britain and the most effective way for the Royal Air Force to protect against this threat was to send the latest model of Spitfire up to attack the rockets. Once the rocket had been visually identified the Spitfire pilots would either shoot the rocket down with cannon shells or would fly alongside and slide their wingtips under the wings of the rocket in order to turn it over and redirect it towards the English Channel. This method was not foolproof but did, nevertheless, present a highly effective countermeasure. Had the Diefenbaker government simply looked to history they would have seen that manned aircraft were still the best solution to the threat of missiles. While it can be argued that there is no comparison between a V1 rocket and an ICBM the concept remains the same. Spitfires and V1's were the manned interceptors and ICBM's of their day. ...read more.

These beliefs, while unprovable, may not be entirely without merit. Canada did, after all, purchase an American missile system after the Arrow was cancelled. There is also the school of thought that believes that the Arrow was cancelled because it represented a threat to the CIA's new U2 spy plane. The U2, prior to the development of the Arrow, could fly higher than any other plane in existence thus making it the perfect platform from which to spy on other nations. The Arrow could easily operate at altitudes higher than the U2 was capable of achieving. This made the Arrow, whether in the hands of the Canadian military or that of another nation, a threat to the U2. Might the American government have pressured the Canadian government into canceling the Arrow in order to protect the U2? It is likely but will never be proven. The American government knew that Canada could not afford both the Arrow and the Bomarc and, perhaps, threatened to station Bomarc's immediately south of the Canadian border in order to scare the Canadian government into choosing the missile over the CF 105. Perhaps this tactic was also used to protect the U2. The answers to these questions will likely never be answered and remain fodder for the conspiracy theorists among us. It is clear, then, that the Arrow was developed to meet Canada's foreign policy needs with regards to both the United Nations and NORAD. It is also clear that its 14 cancellation was ill conceived due to the erroneous impression that manned interceptors were obsolete due to the onset of the missile age. This decision was particularly ill conceived in light of Canada's experiences during World War II when it was firmly established that manned aircraft were more than capable of downing unmanned rockets or missiles. The effect that the decision to cancel the program had on Canada's economic and foreign affairs is inestimable and hampered, to a large extent, Canada's ability to develop, and maintain, a foreign policy independent of that of the United States. ...read more.