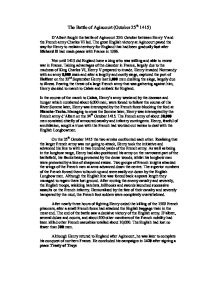 The Battle of Agincourt (October 25th 1415) D'Albert fought the battle of Agincourt 25th October between Henry V and the French army Charles VI led. The great English victory at Agincourt paved the way for Henry to reclaim territory for England that had been gradually lost after Richard II had made peace with France in 1396. Not until 1413 did England have a king who was willing and able to renew war in France. Taking advantages of the disorder in France, largely due to the madness of King Charles VI, Henry V prepared to invade. Henry invaded Normandy with an army 8,000 man and after a lengthy and costly siege, captured the port of Halfeur on the 22nd September Henry lost 2,000 men duelling the siege, largely due to illness. ...read more.

Managing to cross the Somme later, Henry was intercepted by the French army d'Albert on the 24th October 1415. The French army of about 30,000 men consisted chiefly of armoured cavalry and infantry contingents. Henry, fearful of annihilation, sought a truce with the French had worked out tactics to deal with the English Longbowmen. On the 25th October 1415 the two armies confronted each other. Realising that the larger French army was not going to attack, Henry took the initiative and advanced his line to with in two hundred yards of the French army. As well as being in the longbow range, Henry had also positioned his army on the narrowest part of the battlefield, his flanks being protected by the dense woods, whilst his longbow men were protected by a line of sharpened stakes. ...read more.

Demoralised by the fate of their cavalry and severely hampered by the mud, the French foot solders were completely overwhelmed. After nearly three hours of fighting Henry orded the killing of the 1500 French prisoners, after a small French force had attacked the English baggage train in the mear end. The end of the battle saw a decisive victory of the English army. D'albret, several dukes and counts, and about 500 other members of the French nobility had been killed other French casualties totalled about 10,000. The English had lost no fewer than 300 men. Although Henry retured to England after Agincourt, he was later to complete his conquest of northern France. He concluded his campaigns in 1420 after signing a peace Treaty of Troys ...read more.