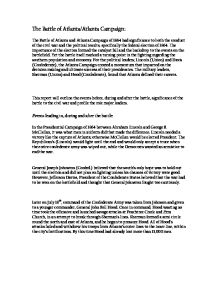 The Battle of Atlanta.

The Battle of Atlanta/Atlanta Campaign: The Battle of Atlanta and Atlanta Campaign of 1864 had significance to both the conduct of the civil war and the political results, specifically the federal election of 1864. The importance of the election formed the catalyst fall and the backdrop to the events on the battlefield. Yet the battle itself marked a turning point in the fighting regarding the southern population and economy. For the political leaders; Lincoln (Union) and Davis (Confederate), the Atlanta Campaign created a momentum that impacted on the decision making and ultimate success of their presidencies. The military leaders, Sherman (Union) and Hood (Confederate), found that Atlanta defined their careers. This report will outline the events before, during and after the battle, significance of the battle to the civil war and profile the role major leaders. Events leading to, during and after the battle: In the Presidential Campaign of 1864 between Abraham Lincoln and George B. McClellan, it was what men in uniform did that made the difference. Lincoln needed a victory like the capture of Atlanta; otherwise McClellan would be elected President. The Republican's (Lincoln) would fight until the end and would only accept a truce when the entire confederate army was wiped out, while the Democrats wanted an armistice to end the war. General Joseph Johnston (Confed.) believed that the south's only hope was to hold out until the election and did not plan on fighting unless his chances of victory were good. ...read more.

At 20 years of age he graduated West Point Military Academy sixth in his class. In 1853, tired and bored with the U.S. Army, Sherman resigned. However when the succession movement began he was offered a commission in the Confederate Army, which he refused, and when war broke out he rejoined the U.S. Army. When promoted and put in charge of Union forces in Kentucky he suffered a nervous breakdown and was sent home to rest. In February 1862, he returned and was assigned the lead a division of the Army of the Tennessee. It was this army, under the lead of Sherman that skilfully and methodically attacked and overran Atlanta and from there went on the controversial "March to the Sea" a punishing, destructive campaign from the heart of Georgia to Savannah. Jefferson Davis: Jefferson Davis was born June 3, 1808, in Kentucky. Jefferson Davis was sent to Transylvania University in Kentucky as an early teen and at age sixteen, he was appointed to West Point Military Academy as a cadet and when he graduated was immediately assigned to First Infantry in the U.S. Army. Davis left the army in 1835 when he got married. In 1845 Davis's career became more public when he was elected to congress as a democrat. Davis was then elected to the United States Senate where he became a leading spokesman for southern rights and in 1853 he became the secretary of war in the cabinet. ...read more.

Calhoun, "War is cruelty and you cannot refine it". Later in a letter to General Henry Halleck he wrote that "if the people (the civilians) raise a howl against my barbarity and cruelty, I will answer that war is war and not popularity seeking" These actions as well as Sherman later unforgiving and relentless 'March to the Sea' demonstrated that Confederate civilians would not be spared from the Union's attritional policy. The campaign resulted in disastrous effects for the city of Atlanta. Atlanta was a significant town being one of the Confederate's great military depots, full of foundries and workshops for the manufacture and repair of arms and material for war. The city was also a major rail hub, beginning in Savannah and leading all the way up to northern Mississippi and western Tennessee. For the union, gaining Atlanta would have been an enormous advantage. While without it the Confederate Army was still powerful, being able to move men and guns/ammunition into the western theatre of the war, as well as maintain the south's limited industrial infrastructure. When Sherman destroyed the city, this major infrastructure was lost, leaving the south at a great disadvantage leaving them almost completely surrounded, powerless and extremely venerable and giving the Union the advantage it needed to swarming the south in Sherman's devastating "March to the Sea". Conclusion: The Battle of Atlanta was a pivotal point in the American Civil War, which shaped the subsequent events that led to the end of the war. These include the Presidential Election of 1864, the military actions that followed the war, and the consequences of Atlanta's destruction on the civilian population and the southern army. ...read more.