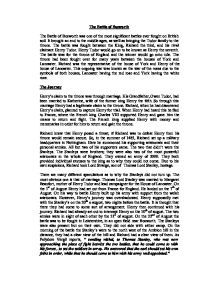 The Battle of Bosworth.

The Battle of Bosworth The Battle of Bosworth was one of the most significant battles ever fought on British soil. It brought an end to the middle ages, as well as bringing the Tudor family to the throne. The battle was fought between the King, Richard the third, and his rival claimant Henry Tudor. Henry Tudor would go on to be known as Henry the seventh. The battle was for the throne of England and the winner would go onto rule. The throne had been fought over for many years between the houses of York and Lancaster. Richard was the representative of the house of York and Henry of the house of Lancaster. This ongoing war was known as the war of the roses due to the symbols of both houses, Lancaster having the red rose and York having the white rose. The Journey Henry's claim to the throne was through marriage. His Grandfather, Owen Tudor, had been married to Katherine, wife of the former king Henry the fifth. So through this marriage Henry had a legitimate claim to the throne. Richard, when he had discovered Henry's claim, planned to capture Henry for trial. When Henry had heard this he fled to France, where the French king Charles VIII supported Henry and gave him the means to return and fight. The French king supplied Henry with money and mercenaries in order for him to return and gain the throne. ...read more.

In the picture the hill can be seen from the eastern side of the hill, in Northumberland's position. However the sources seem to disagree with one another. In describing Richard's army, Diego de Valera describes it as large as, "70,000 combatants." However, this sum is too much to fit on Ambion hill so it seems that Valera is either misinformed or is biased to one side. Valera continually describes a Spanish man named, "Salazar," in his account. This Spaniard is on the side of Richard III, by supporting this character Valera will be supporting Richard, as it is Richard that Salazar is fighting for. Making matters worse Salazar is foreign so his information is possibly old, exaggerated or just plain inaccurate. Polydore seems to have the more accurate and realistic figures, "for the number of all his soldiers, all manners of ways, was scarce, 5,000 besides the Stanleyeans, whereof about 3,000 were at the battle, under the conduct of William. The King's forces were twice so many more." So it seems that Henry's army would have made up of 5,000 men and Richard's would have had 10,000- 12,000. This seems to be quite accurate as this size would have been able to fit on the hill and it seems that Henry would have had 5,000 supporters, hence Henry's need for the Stanley's. ...read more.

Richard had seen Henry breaking away from his army with a small number of soldiers. When he saw this he made a wild charge towards him, supported by his cavalry. This charge meant Richard could have won but due to the wildness of the charge there was no one to protect his rear from the Stanleys. This mistake is again accounted by the reliable Polydore Vergil, "Henry abode the brunt longer than every his own soldiers would have guessed, who were now almost out of hope of victory, when as lo William Stanley with tree thousand men came to the rescue: then truly in a very moment the residue all fled, and king Richard alone was killed fighting manfully in the thicket press of his enemies." This show how important the interception by the Stanleys was, without it Henry was sure to have lost. As time has gone on later commentators have called Richard a demon, he was even demonised by William Shakespeare. He was branded a cruel and demonic person. However as the sources show it seems Richard was brave and valiant even in his last moments, fighting bravely to the death. As John Rous accounted, "for all that, let me say the truth to his credit: he bore himself like a gallant knight." No matter what most enemies of Richard said most called him a valiant warrior who fought bravely in his last moments. ...read more.